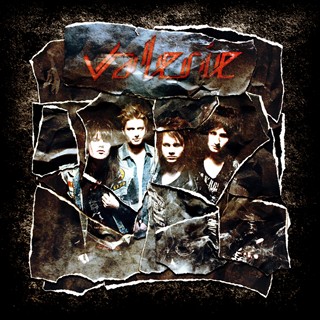 Review:
Cast your eyes down the list of song titles on Valerie‘s self-titled debut album, check out the cover, stick the first track on, and if you’ve been listening to music long enough you might just dismiss them as yet another 80’s retro outfit plundering the treasures of the past only to serve up a chest full of ghosts. That’s OK by this band though — who tell us that their sound is ‘1987 in 2012’ and it’s hard to argue with them.

The album’s an arresting set of tracks that’ll stalk you from day one. Anthemic standouts “Heat Of The Night”, “When Two Hearts Collide”, “Taste The Bullet” and “Tear Down The Walls” keep the air punching’ foot tappin’ tempo alive and kickin’. Producer Bard Torstensen has made this band sound formidable while guitarists BT Valerie and Magnus Christiansen provide an imposing display of riffery and finely crafted solos that consistently excite but never indulge. The rhythm section of bassist Augustus Clark and skins man Erlend Omdal underpin the outfit and it’s clear that the band understands that it’s the song that carries the music.

At only eight tracks Valerie do well to favor quality over quantity, and a special mention must go to the evocative closing ballad “Love Is Not Enough” which would sit well on any Scorpions or Great White album and yet has that something special that gives these Norwegians a trademark sound. If you loved it then… you’ll love Valerie now.