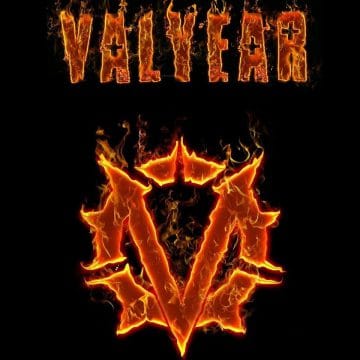 Review:
Occasionally an independent CD will come across my desk that I can’t stop listening too. Valyear from Oshawa, Ontario, Canada has produced one of those EPs. Bassist Joe Petralia had contacted me about giving this disc a listen. My friendship with Petralia dates back some 25 years, so I was confident that I would not be disappointed.

Valyear is comprised of vocalist Chad Valyear, bassist Petralia, guitarist Geoff Wilson and drummer Rick Welbanks. Valyear’s bio on their Facebook page states as follows “Limitless! No borders or boundaries! We are fans as much as musicians! We create what we would want to listen to! No genre will be untouched or unexplored!” Upon my first listen to this EP, I couldn’t agree more with this statement.

The EP starts out with a very comical statement by none other than Rock Goldstein. After one minute and 10 seconds of Goldstein, the music begins. “I Hate Your Face” starts off hard and heavy with a great drum pattern that vocalist Valyear emulates over top with an angst filled lyric. The guitar cuts me like a razor with the chord progression fitting perfectly with the cool swagger of the drum beat. As the verse approaches, Valyear’s vocal range is well on display. Dynamically, Valyear does a superb job of conveying his feelings through his smooth vocal delivery. Trying to categorize Valyear’s sound is difficult. Valyear really sound like themselves, not duplicating anyone. Of course, the sound has a more ’90s hard rock vibe rather than that of an ’80s hair band. I do hear influences of mid ’90s Skid Row, Alice In Chains and even Slik Toxik, but that doesn’t take anything away from the band’s originality. “Feed My Pain” kicks in with a cool riff with a great groove drumbeat underneath. What captures me about this composition is the vocal exuberance. Valyear really have done a great job creating an in your face heaviness musically, but mixing in a great sense of fantastic vocal pop sensibilities. The chorus is extremely catchy. Valyear has anger in his voice, but at the same time there is a sweet nature that lies beneath that tough exterior.

“Hit the Ground” continues to not disappoint the listener. Yet again, Valyear’s strong vocal is on display. I am taken at how Valyear conveys his feelings through his vocals. Emotionally, it is obvious that Valyear puts everything into his craft. So far these songs are well written and the structuring is superb. The background vocals accompanying the song are stellar and predominantly heard within the mix as well. “Rise My Enemy” may very well be my favorite track on this EP. I will make a comparison on this song frankly because that’s what I hear. This guitar riff reminds me of the track “Twenty Something” on Slik Toxik’s 1994 Irrelevant album. I could picture Toxik vocalist Nick Walsh behind the microphone. I also hear remnants of Florida band Saigon Kick. That infectious guitar riffing of Wilson beneath the powerful vocal of Valyear really keeps my attention. The chorus features a subtle vocal line that is straight and to the point. Then comes a blistering guitar solo that adds a nice depth to the song. This solo is tasteful and shows Wilson’s ability to create a composition within the restraints of the song.

“Screams” is a live composition recorded at Oshawa, Ontario, Canada’s hot spot The Atria. The delivery overall in a live setting shows Valyear’s energy and tightness. The song itself is very well written. A fantastic heavy hitter with more vocal ear ecstasy. “Feed My Pain (25F Mix)” is a remixed version of a previous track. This version features more of a digital type drum beat. The chorus is still there. This just adds a different depth to this already fantastic song. I am not sure which version I prefer more to be honest. It’s cool to hear the same song using different production techniques.

Overall, this EP is something I can really sink my teeth into. Like I stated, it has more of the ’90s sound than the ’80s. It’s very obvious that Valyear have gone to great lengths to work these songs and make them sound as they do. I will admit I do hear influences throughout, but not obvious ones. I give these guys kudos for originality. It is hard to take a certain sound or genre and make it sound fresh. Mission accomplished here. If you held a gun to my head and asked me to categorize Valyear, I would say that fans of Alice In Chains, Slik Toxik, Skid Row and ’94 Mötley Crüe would thoroughly enjoy this EP. If you are a fan of these such bands, do yourself a favor and hunt this EP down. You will not be disappointed.