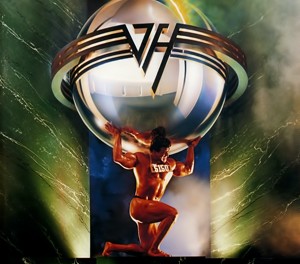 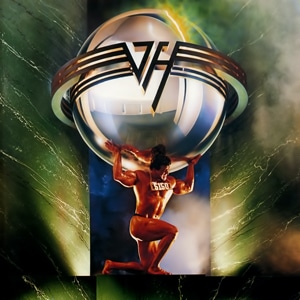 Review by Olivier:
It’s incredible to think that 30 years have already passed since the release of Van Halen‘s 5150. I can remember that time just like if it was yesterday. How does a band that has sold more than 10 million copies of its last record in the United States alone follow up such an album, especially when it changes lead singers? Van Halen were faced with the unenviable task of not only following the Diamond certified 1984 but also coming up with a “good enough” (pun intended) replacement for their departed charismatic frontman David Lee Roth. In a shrewd move, the Van Halen brothers (and perhaps Michael Anthony if he had a say in there) decided to go with the red rocker Sammy Hagar who was fresh off a platinum album himself with V.O.A., which was spearheaded by the rocking single “I Can’t Drive 55.”

Similar to Judas Priest, Van Halen have always had a tendency to reinvent their sound somewhat from album to album. 5150 was no exception as the group adopted a more keyboard laced sound and Eddie Van Halen‘s “brown” guitar sound was very prevalent throughout the entire record. Truth be told, I was quite disappointed with the first single “Why Can’t This Be Love” which is one of the weaker tracks on 5150. Heavy on the keyboards, it paled in comparison to the singles that had been released from Van Halen‘s previous album 1984. Can anyone honestly say that they prefer “Why Can’t This Be Love” over “Panama”, “Hot For Teacher”, “I’ll Wait” or even the overplayed (but still awesome) “Jump”?

Funny enough, the first three songs on 5150 are pretty weak but after that, Van Hagar — I mean Van Halen — really hit their stride. The opening track “Good Enough” is just that — good enough but nothing spectacular. Whenever I listen to that song, it always feels like had the band worked on the track just a little more, they could have ironed out the kinks (such as the repetitive chorus) and make the song worthy of an opening track on a Van Halen album. “Get Up” is another track that feels somewhat unfinished and lacking a really good melody. Perhaps Van Halen were thinking that this would be the sequel to “Hot For Teacher” but it simply does not measure up in that regard.

As previously stated, once you get past those first three tracks, the quality goes up ten fold. “Dreams” is just below “Right Now” in terms of brilliant goose bump “this is a hit” material. A great song from start to finish, if anything, “Dreams” proved that Van Halen would do just fine with Hagar as their frontman because the magical songwriting was still there. “Summer Nights” is a cool mid-tempo rocker with great vocal harmonies and its guitar solo taking me back to the Fair Warning era. “Best Of Both Worlds” is a classic Van Halen tune with Hagar singing and probably the bluesiest number on the album. I will always envision the band’s performance at New Haven on Live Without A Net whenever I hear that song. “Love Walks In” is another stellar ballad which is just about as good as “Dreams” in my book but which never got its just due. It’s simply a fantastic track which while heavy on the keyboards works really well, has some killer and memorable guitar licks on it, and of course those trademark amazing vocal harmonies. Hagar really carries the song with his voice which further cemented on why he was a more than adequate replacement for Roth.

515o closes off with the title track, which is another mid-tempo and enjoyable rocker similar to “Summer Nights” and the longest track on the album nearing almost six minutes. Van Halen have always been known to include sometimes odd tracks on their albums from “Could This Be Magic” on Women And Children First to “Happy Trails” on Diver Down. Accordingly, to have another “weird” track finish a Van Halen album is no surprise. “Inside” is that odd track for 5150. Personally, I have always enjoyed “Inside” because it’s got a really good groove to it and reminds me how much fun that the Van Halen brothers, Anthony and Hagar were seemingly having together while doing this album and reigniting their passion for music as a whole.

Was 5150 a worthy follow up to 1984? Certainly, the sales figures indicate that it was with 5150 going six times platinum in the United States alone and ending up as Van Halen‘s third best selling album to date. While I still prefer 1984 due to the well known songs that came off that album, 5150 is always an enjoyable album to listen to (even those three first songs), has stood the test of time quite well and was more than “good enough.”

Review by Metal Mike:
Let’s get this out of the way right now. No, no, no, and no. Sammy vs. Dave is NOT a part of this discussion, so take it somewhere else. I am going to review 5150 based on its own merits and 30 years of owning the album.

The title 5150 is California law enforcement code for someone who is mentally disturbed. 5150 is the seventh Van Halen album, and the first without David Lee Roth, and featuring new lead singer Sammy Hagar. The Red Rocker started his career with the ’70s band Montrose, and had success as as solo artist in the early ’80s with such songs as “Heavy Metal” and “I Can’t Drive 55”. Hagar came with his own strong pedigree and helped push 5150 to #1 on the Billboard Hot 200 and eventually six times platinum record sales in the US (that’s over six million records sold).

Since MP3s came along, I haven’t listened to 5150 as an entire record in a long time. There are good parts and better parts, but overall, a great album. The opening track, “Good Enough” introduces Hagar, but Eddie Van Halen’s guitar playing is instantly recognizable. This song ultimately and obviously sets the stage for what happened later in 1991 with the guitar driven For Unlawful Carnal Knowledge offering. “Why Can’t This Be Love” is one of two slower paced songs, along with “Love Walks In”. Not quite ballads, but not quite fist raisers either. “Why Can’t This Be Love” still gets some radio airplay around these parts (Canada), when other Van Halen songs are too heavy for the morning show. “Get Up” is the hardest rocking song, with a drum beat similar to the opening of “Hot For Teacher.” Considering the rest of 5150 is more restrained, “Get Up” sort of stands out. And, while the previous Van Halen album 1984 had some keyboards, “Dreams” is driven by keys. While Eddie Van Halen does double duty throughout 5150 with keys and guitars, Hagar is talented enough to pick up the guitar slack.

As far as I’m concerned, we now get into the meat of 5150. “Summer Nights”, “Best of Both Worlds” and “5150” are some of my favourite songs from that era. On “Summer Nights”, you can almost feel the humidity as you cruise down Main Street with the stereo blasting. “Best of Both Worlds” is simply a cool song. Well built around strong guitar riffs, and Sammy works the vocals well. 5150 is a guitar lover’s dream. Eddie Van Halen takes a line and runs with it all the way through the song. Closing the album is “Inside”, which kind of sounds like a middle finger to David Lee Roth if you listen to the background chatter; someone yells out “Hey Sammy, I found a hat and a pair of shoes, try them on for size?”

I would be remiss if I didn’t mention the impact this album had on me… and the subsequent live concert video Live Without A Net. For a couple of years, I toyed with the idea of playing guitar but after seeing Alex Van Halen and his 5150 drum solo, I ditched the strings for sticks and never looked back. In retrospect, sure he was using pads instead of shells, but that helicopter thing was still impressive!

5150 may not be the record to start off your Van Halen experience. The band is too diverse and eclectic to pick one record over another, one singer over another (i.e. Sammy or Dave). However, if you’re reading this, then you probably already know that. Hagar made Van Halen a different band, for better or worse. The fact is 5150 is an incredibly solid offering from one of the greatest rock bands of all time, drunk or sober.

Reviewed by Metal Mike and Olivier for Sleaze Roxx, March 2016