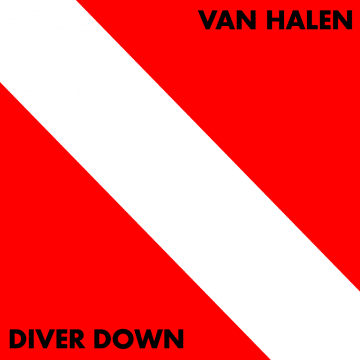 Review:
This is the mixed bag of Van Halen albums. Half covers/half originals! At the time of its release in 1982, to say I was confused as a 15 year old listening to Diver Down would be the understatement of well… 1982!

My Van Halen collection up until that point consisted of Fair Warning and Women And Children First. So when I heard playing on our radio in town here in Thunder Bay, Ontario, Canada, “Oh Pretty Woman” (a Roy Orbison cover) with Eddie Van Halen doing his whammy bar divey things and David Lee Roth leading the circus and conducting Alex Van Halen on drums and Michael Anthony on bass, I was sold!

“Where Have All The Good Times Gone” — So Van Halen kicks off the party with a Kinks cover tune. But they Halenize it and if it wasn’t for the credits, I would have thought that Dave and company Halen wrote this. Dave‘s vocals are smooth on here! Eddie just nails out a cool EVH like solo! Of course. He’s the best and Ed locks in and rocks out the solo with Al and Mike. Great rock track!

“Hang Em High” — Ed rips out of the gate on this original and man to this day, this is one of my fav songs! Al‘s drums are smashing at full throttle and Mad Anthony keeps up on the bass while Dave lays down a low voice “Somewhere, he lost it in a turn” and whoah! The solo is so good! What could I add to it other than it sounds like Ed‘s guitar is gonna explode. During the solo, Al‘s double bass drumming sounds like it’s smashing and throttling down of a cliff! This is a crash course in over the top drumming. It’s the deal! Of course, at the end of “Hang Em High,” it’s a free for all workout on the instruments!

“Cathedral” — Ed is noodling around on his guitar and when I mean noodling, more like classic playing which to this day he still incorporates into his live solo.

“Secrets” — This is another track that never gets talked about but it should. This should have been a huge single! Dave sings a real good vocal and great backing vocals as always from Michael Anthony. Great rip out of a solo but of course it’s Eddie and no one was touching him back than in the land of guitardom.

“Intruder” — This short little creepy intro is propelled by Alex‘s drums and bizarro smoldering synth/guitar and boom into….

“(Oh) Pretty Woman” — And here’s Halen making Roy‘s tune their own and I hope old Roy got some royalty cheques from this. This single was huge and Ed keeps the song simple but man, him playing stuff simple is so cool… Great song right into Dave‘s backyard for a barbecue!

“Dancing In The Streets” — Another single but I guess Dave likey and the rest of Halen not so much or so the story goes. Myself, it’s there and it’s kinda weird that I would say that about a Halen tune. But in their defence, they did not write it.

“Little Guitars” — The drums, Ed and his sound take over another great opening and another sure fire classic. Dave and Mikey carry the tune vocally and the VH brothers do the rest! Love the pre chorus on this “Catch as catch, Catch as catch.” Yeah whatever Dave… However you were saying things back then, you made them sound cool!

“Big Bad Bill (Is Sweet William Now)” — Hey! The bros get their Dad (R.I.P. Jan Van Halen) on clarinet and Ed and his acoustic with Al on the brushes make this song their own! Love the shuffle of the beat and the strumming guitars! It’s all here folks… ‘Doin’ up the dishes, mopping up that floor!” Awesome!

“The Full Bug” — Some crazy ass acoustic starts “The Full Bug” and boom! Halen kicks down the walls to the party shack with this song! Dave knows a woman who bite your ass! Party Halen has rummaged thru your house and destroyed everything in site and Dave is telling the ladies he will give you the best part of a man! Cool as Dave chugs on the harmonica! With the Halen boys scorching riff rock underneath. Classic very underrated track!

Brought to you by Van Halen’s Official You Tube Channel: Van Halen TV