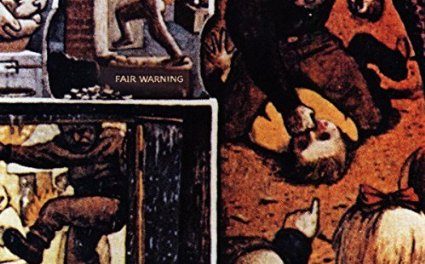 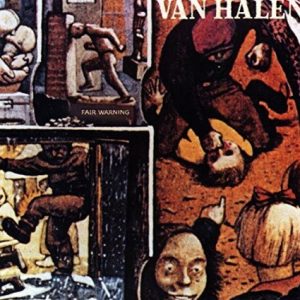 Review:
It’s hard to believe that Fair Warning is already 35 years old! My first introduction to Van Halen was a year earlier (1980) after the release of the classic Women And Childern First record. Women And Children First was the first record I had heard that sounded like a studio album recorded live!

Eddie Van Halen was a guitarist that was out of everyone’s element. The guy had such a menacing cool guitar sound that defied everything that was around. The bands that I was listening to at the time had clean guitars well produced — take a bow KISS and Cheap Trick. And add in the mix brother Alex on the drums and Michael Anthony providing excellent backing vocals and rock solid bass. David Lee Roth not only was the lead singer but add to his resume the term “ring leader.” Roth ran the party to the wee hours of the morning. Refuel and do it again!

Once I saw the ad for Fair Warning in Circus Magazine, it was a race to the store to buy the album ASAP!

“Mean Streets” — I still recall being 14 at the time and listening to Ed‘s tapping at the beginning of “Mean Streets” and being baffled! Who does this? No one ’til now and it’s Eddie Van Halen! “Mean Streets” builds with that opening power riff and when Alex and Michael hook up, it’s a sonic assault on the senses! Dave‘s vocal here is real good! He sounds angry and of course with the music pulsating in the background, how could Dave not sing with an edge! The whole song is one big sonic sledge hammer. Great musicianship and love how they just chill right out with the “Some one said fair warning!” And ramp up “Mean Streets” back up! What a start…

“Dirty Movies” — Camp Halen begins track 2 with some slow chill music and before too long, the pace is picked up! These lyrics in this tune are actually right up Dave‘s alley so to speak! “Dirty Movies” has a different kind of Halen groove! Dig Anthony‘s bass line that drives the song with Alex‘s drums. Ed of course takes care of everything else while Dave passes out party treats at the studio door! Wicked tune and it shows that Van Halen can make it heavy by not playing at a 1,000 mph!

“Sinner’s Swing” — Alright, I take that last line back about the 1,000 mph! “Sinner’s Swing”… what can you say about this track! Ed and Al are locked in loaded and what a pace set forth by those two! Dave once again lets us know in case we forgot by track three who the boss is! “Sinner’s Swing” — you know by the title alone it’s going to be awash in real fast guitar playing, speed drumming and solid bass with the master of ceremonies leading the way at the mic! Man, I miss the ’80s!

“Hear About It Later” — Ed does some nice chillax picking and this is a hard rock melodic masterpiece! Great verses! Better chorus and how about that build-up into Ed‘s solo complete with Alex smacking the crap out of his cowbell? Fantastic! The song just builds and builds and keeps going right up ’til the end when the song crashes and Dave does one of his patent ‘Wow’s”

“Unchained” — What an opening! Ed means business! Van Halen mean business! This is a late night bar room blitz to the exits! Van Halen lay down the law in serious fury of epic guttering. Ed‘s solo is an all-time great while the “C’mon Dave, give me a break!” line is a classic that is probably repeated by Van Halen fans worldwide!

“Push Comes To Shove” — Van Halen lay off the gas pedal and here’s some funky bass and drums. “Push Comes To Shove” is a different animal on this album but it fits in nicely as it’s one track no one ever talks about! Ed as well all know adapts to a different kind of playing and Dave even stretches out his tonsils and simmers the hell down with a chill vocal. Good tune!

“So This Is Love?” — Whoa! Anthony and Alex set the pace and are locked in loaded in an opening groove. Is it me or does the sound drop and then picks up by the chorus — which is a great chorus as a matter of fact! Dave writes some real cool lyrics and Ed plays a real great clean sound but man, that solo at the end is one of my favs of his! Classic!

“Sunday Afternoon In The Park” — Synth and drums meet bass… Bass meet synth and drums! This is heavy man! Dave gets the day off in this musical mash-up of like a musical, only mid ’70s Black Sabbath smashed into an oncoming early ’80s Van Halen! I recall catching Van Halen on their Carnal Knowledge Tour in Winnipeg back in November of 1991 and Michael Anthony played his bass solo to “Sunday Afternoon In The Park” with Alex! You want a slap da bass on the outside of your head! Crank this!

“One Foot Out The Door” — Man, here comes Van Halen with a nasty fuzzed up bass and synth. Van Halen pull out the stops on this end of the album’s power rocker! Dave yammers on about “having one foot out the door” as the husband is coming home! Hahaha…. Van Halen sound pissed on this album but they can end the album with a little sense of humour!

Watch the official music video for “Unchained” by Van Halen