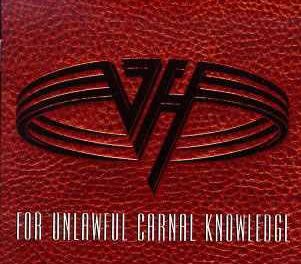 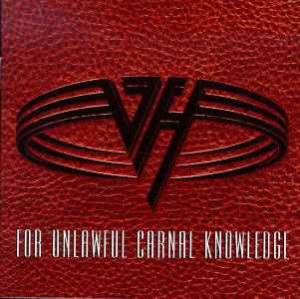 Review by Metal Mike:
Hands up all you Van Halen fans who own a copy of For Unlawful Carnal Knowledge? That’s what I thought. The FUCK album debuted at #1 on the Billboard Hot 200 and spent three weeks there, replacing Skid Row’s Slave To The Grind in that slot. Between Canada, the U.S. and the U.K., FUCK sold over 3.2 million records, going three times platinum in the U.S. alone. It spawned three #1 hits, “Poundcake” “Runaround” and “Top of the World”, and won a Grammy Award in 1991 for Best Hard Rock Album, beating out AC/DC, Alice in Chains, and Guns N’ Roses that year.

Produced by the acclaimed dial twister Ted Templeman (Aerosmith, BulletBoys and a thousand others), FUCK was the third album under Sammy Hagar, and their ninth studio recording overall.  Following the success of the synth-laden 5150, and the more organic OU812, the band tried to morph its sound into classic hard rock, leaving the keyboards and blues guitars behind, while attempting to capture the early ’80s Van Halen sound again.

Did it? I’m not sure. I have mixed feelings about this disc, even after dusting it off and listening to it as an album for the first time in years. It sure isn’t my favourite Van Halen album — it isn’t even my favourite from the Sammy era.  Yes, there are elements I still enjoy, but more for the sentimental value of my late high school days. I recall my buddies and I almost being arrested for doing donuts in a condo parking lot with “Runaround” blasting from the car stereo. 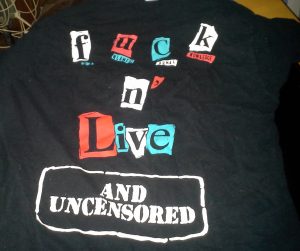 Or the time we wore our “Fuck n’ Live” tour shirts to a Catholic school dance, taking bets on how long it would take to get kicked out (23 minutes won the bet!).  Or when opening act Alice in Chains was booed off the stage to the chant of “Eddie!” at the Skydome in Toronto in 1991…. aaah, good times.

The thing is, beyond a few select tracks, FUCK didn’t do it for me. It seemed over-produced, too forced, and generally uninteresting. Sure, it garnered all those accolades listed above, and even an U.S. Grammy, but don’t forget that in ’89, Jethro Tull beat Metallica’s And Justice For All…. for the same award, so it doesn’t mean that much!

In my opinion, songs like “Judgement Day”, “Spanked” and “Pleasure Dome” were ok, but mostly filler for the known winners.  Even “Poundcake” or “The Dream Is Over” sound like Van Halen were sitting around asking how they could sound more like Van Halen. Of course, “Right Now” is a classic, used in many commercials to promote everything from non-profits to Crystal Pepsi.  “Runaround” — I’ve already spoken of — and “In ‘N’ Out” had the same emotional attachment, but for other reasons.

In my final analysis, For Unlawful Carnal Knowledge was an album that seems more methodically “constructed” rather than organically “created.”  It suited its time and was a huge hit… good for them. Funny thing though, for the Sammy era, it is one of my least listened-to recordings. Let the debate begin… what do you think?

Reviewed by Olivier:
Van Hagar‘s third album For Unlawful Carnal Knowledge may have debuted at #1 on the Billboard charts back in 1991 but twenty five years later, it still remains one of the worst — if not the worst — Van Halen album ever released (along with arguably Van Halen III and A Different Kind Of Truth). There is no doubt that it is the worst Van Halen album released with lead singer Sammy Hagar. In fact, if it wasn’t for the absolutely stellar track “Right Now” which still gives me goose bumps to this day, the album should just be considered a dud. Alright, I admit that “Top Of The World” is a pretty good catchy tune as well.

For Unlawful Carnal Knowledge remains the Van Halen album that I have listened to the least in the last twenty five years and with good reason. I will venture to say that if it wasn’t for the song “Right Now” and the name Van Halen behind the album, For Unlawful Carnal Knowledge would be universally viewed as a terrible album. For some unknown reason, the Van Halen gang led by Eddie Van Halen was unable to come up with any really good melodic hooks and instead came up with lumbering, boring, weird sounding guitar driven songs (with the exception of “Right Now” of course). Starting a song (“Poundcake”) with an electric drill tells you all you need to know about the melodies that you are going to hear on an album.

For Unlawful Carnal Knowledge (also known as F.U.C.K.) is the 9th studio album by American Hard Rock band Van Halen, released in 1991. It debuted at #1 on th…

Please BUY this song, thanks.