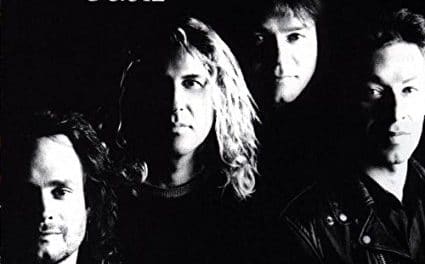 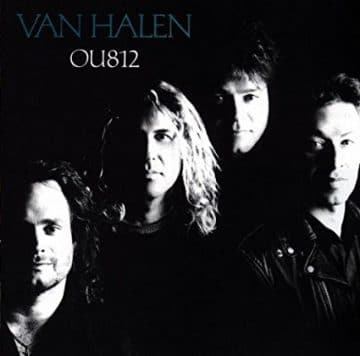 Review:
My brother, friends, and myself were HUGE Van Halen fans in high school. We watched the VHS Live Without A Net constantly, made homemade shirts that said “5150,” had all the band’s cassettes. We would videotape anytime the band appeared on MTV, to watch over and over. My best friend in high school even went to Cabo San Lucas for his honeymoon years later due to our love for the band (especially the Sammy Hagar years). I did not become a huge fan of theirs until Sammy Hagar joined the band, and started listening to the 5150 album. The first concert I ever attended was Van Halen on the For Unlawful Carnal Knowledge tour with Alice In Chains opening in Burgettstown, PA.

The second album released with Hagar, 1988’s OU812, was heavy on keyboards and helped the band get more mainstream on the charts, compared to the David Lee Roth years, continuing from the radio hits from 5150. I had the cassette of OU812, and we played it constantly until my brother upgraded to the CD.

The album begins with “Mine All Mine,” which starts off with keyboards playing the background rhythm. This song was one of my favorites on the album, with the spiritual lyrics that Hagar brought to the band , which the narrator is searching for truth in the world that even the devil couldn’t satisfy. Since most of the Roth years were about partying and girls, Hagar‘s words brought more to the table in terms of depth in my opinion. I also liked this song because it was not a typical song structure of verse/chorus/verse. This song really doesn’t have a chorus, besides saying “Mine all mine.” The song had an unique structure to it.

The second track is the famous “When It’s Love.” This song got national airplay on radio and was in constant rotation on MTV. This was the first song I heard from the album, even though there was a single released before this one. Where I live, outside Youngstown, Ohio, this was the song that most of us thought was the first single. This song is still constantly played in my area on the ’80s weekend radio shows. This is one of the songs by the band that hit radio that I don’t get tired of hearing. The melody is catchy, especially the “Na Na’s” at the end of the song.

Track three, “A.F.U. (Naturally Wired),” is about being on the road touring, and is a hard rock song that many fans don’t look at when saying that the Hagar era was all ballads and pop songs. This song could have been on any of the Roth era albums with the structure . The guitar solo is classic Eddie Van Halen sounding.

The longest song on the CD is “Cabo Wabo” at almost seven minutes long. The great thing about this song is that it doesn’t feel like a seven minute song. Many Van Halen fans know the history of the song, coming from a place Hagar would retreat to, and eventually built his club there, along with trade-marking his tequila after the name. The lyrics are descriptive that everyone at the time wanted to go and visit this place, and stumble around like the man in the song along the beaches and the night life. Just like most Van Halen songs, the backing vocals are strong on this one.

The next track is probably my least favorite on the CD; then and now. “Source Of Infection” is musically good, with Alex and Eddie basically up front on the song instrumentally, however lyrically it is not that great. There is only one part of the song that has more than four words in the section. Most of the song is filled with “Alright” and “That’s right.” Adding “Oh baby you know what I like” in the song is more reminiscent of 1950’s singer The Big Bopper, which a hard rock band like Van Halen should’ve avoided (it just comes off humorous and cheesy). The musicianship is good if you want to hear a jam session with Eddie and Alex.

“Feels So Good” was another big hit single for the band, and was all over radio and the video shows. It was the fourth single to chart from the album. The keyboard heavy song is another one of my favorite Hagar era songs, although some fans may have been alienated from the album due to the heavy keyboards. The chart success of the song, that is still played today, shows that great songs last.

“Finish What You Started” was a song that made every guitar player at the time strip down and play like Eddie; a cleaner, less distorted playing that is almost an acoustic sound. Hagar plays rhythm acoustic on the song as well, which is one of the only times he played acoustic on the Van Halen albums. Alex‘s drumming is unique as well in the introduction, not doing a straight basic beat before kicking into the regular beat.

“Black And Blue” is the most sexual lyrically charged song on the album. Yes, some will argue that “Finish What You Started” is sexual in nature, but there are many stations that played it on the radio that didn’t get what the song was about. This was technically the first single released, but in my area, I didn’t hear this song until we got the cassette. The nice thing about this song is how when the listener thinks it’s over, it starts up again with the slow grooving instrumental ending. However, that being said, this one is my second least favorite on the album. Listening to this song now, I can pick out that it was done in the 1980s. It sounds dated to me.

The closing song (if you had the vinyl or cassette) was “Sucker In A 3 Piece.” This song is another one that has the classic Van Halen feel to it, and could’ve been on a Roth era album. One part in the song, Hagar just talks a verse, which also made me think that it could’ve been on a Roth recording with the band, a la “Panama.” This is a good rocking song that makes a great ending for the album, after starting strong with “Mine All Mine.”

If you had the CD when it came out, a cover of Little Feat‘s “A Apolitical Blues” ends this album. This is just a basic blues song, that once I listened to the CD and saw the extra song, I wasn’t missing much. I was not a fan of Little Feat either, so this song does not do much for me covering it. There are many good Van Halen songs that are covers, but this one is not one that I enjoy (taking nothing away from the musicianship of the artists).

After listening to OU812 again years later, I have to say that it may be my fourth favorite Hagar era album, behind 5150, For Unlawful Carnal Knowledge and Balance (even though Balance has some slow parts for me as well). Those that think the band was only heading into a pop direction needs to dig into the deeper tracks on the album to see that’s not necessarily true. Just like KISS fans, where they have their favorite line-up members, Van Halen fans are just as passionate about the Roth or Hagar years. OU812 is still good album with great musicians on it. Eddie, Alex, Sammy and Michael were a solid band with great songs. Eddie Van Halen was THE guitar player during this era, but I challenge others to re-listen to this album and see how underrated Michael Anthony, Alex Van Halen and Sammy Hagar‘s musicianship was at this time. Although parts of the album sounds dated, the release still brings back great memories of my youth, and isn’t that what music is about; creating memories?

Finish What You Started – Van Halen with Sammy Hagar

One of the best videos, if not the best from VH with Sammy and some nice dance partners. Four years after “Hot for Teacher”, you can see the band had matured…