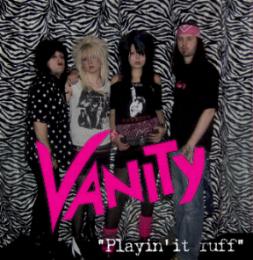 Review:
Crappy artwork aside (although it does look better online), this demo by Sweden’s Vanity Blvd isn’t half bad. I suppose this is what critics now refer to as ‘hair metal’ or ‘cock rock’, that fun and harmless brand of rock in the same vein as Danger Danger or a less roots-oriented Mr. Big. The guys/girls in Vanity Blvd also have the whole big hair/trampy image down pat.

“Nasty Girls” is one of those slick rockers with sexual overtones and “Feed My Obsession” is more of the same. Vanity Blvd also threw in the expected ballad, “Since You Been Gone”, which is the typical dark heart-broken tear-jerker. The gem on this CD though is “Soulshaker”, a catchy little tune with a big chorus that would have been a surefire hit around 1989.

Playin’ It Ruff doesn’t reinvent the wheel, nor does it attempt to. It is simply a fun hair metal album released twenty years too late. But regardless of how successful Vanity Blvd does or does not get, releases like these take me back to a better time.

A couple odd notes here as well. First, the word Blvd appears nowhere on this demo, yet the band says they are called Vanity Blvd. Second, when I was writing this review I had no information about the band around me – and I would never have guessed a female was singing!