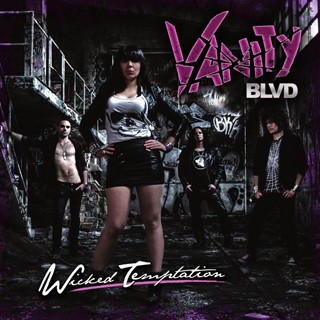 Review:
Sweden knows how to rock. They’ve exported some of rock’s finest over the years and Vanity BLVD is no exception.

Injecting their debut into Sweden’s underground vein, circa 2008, Rock N Roll Overdose paved the way for a hazy reception and little more than a cult following. In contrast to that release, fuelled by a healthy dose of sex, drugs and rock n’ roll, Savage‘s lyrics haven’t changed a bit on sophomore effort Wicked Temptation, and never has her band sounded so fired-up.

Flirting casually between Eurovision pop and glittering glam rock, Wicked Temptation is damn catchy stuff — and although a couple of tracks aren’t up to scratch, for the most part they destroy everything they aim at. Guitarist Traci Trexx is the driving force behind opener “Dirty Rat”, his Jimi Hendrix tinged riffs are a lesson in themselves of how to rock it like a pro. In true anthemic fashion, proceeding single “Do Or Die” takes the amps up to 11 and chugs along at an unstoppable pace. It’s well crafted with classic, heavy solos and catchy commercial hooks that could best represent Sweden at the Eurovision. Elsewhere, unleashing her inner seductive temptress, Miss Savage recalls the likes of Lita Ford at her best on “Hot Teaser” and croons, “Tastes so good, feels so wrong, what the hell have you done? I’m mad about hot teaser.”

A glittering effort doused in straight up rock ‘n’ roll, this collection of songs is a lesson in how to grow up gracefully, without sacrificing the primitive of youth. These Swedish glamsters might not get the commercial kudos that their Nordic predecessors relish (such as Reckless Love, Crashdiet and Michael Monroe) but it’s never too late to resist the temptation and join the cult.