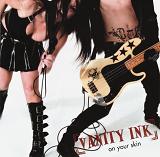 Review:
It wasn’t very long ago that I reviewed Vanity Ink‘s five track EP, and now they are back with their first full-length. The thing that surprised me most about On Your Skin is how much heavier the band sounds despite losing a guitarist. They sound bigger and fuller as a four-piece, which is the opposite of what you’d expect.

Only two songs from the EP show up here, “Had Enough Of Acting Nice” and “Living A Dream”, the later of which remains one of Vanity Ink‘s crowing achievements. Even with the loss of one member, the band sticks to their guns and the sound hasn’t changed much between the two albums. They still mix hard rock with punk and the album seems to gain speed and attitude as it progresses. They still remind me of an updated Princess Pang with a bit of Smashed Gladys when they rev things up.

And revving up is exactly what the band does, good luck finding a ballad on this disc. Vanity Ink starts off with a flurry on the opening tracks “On Your Skin” and “Voyeur Boy”, and after losing their footing for awhile start gaining momentum on the last half of the CD. “Any Day Now” kicks off the best part of the album with a heavy back-end, followed by “Someone Else”, “Anything For My Head” (as close to a ballad as the band gets) and the super-charged “Twist In My Sobriety”.

On one of the songs Vanity Ink claims that “rock ‘n’ roll is not a lifestyle, rock ‘n’ roll is a bloodtype”, meaning that they were born to play music like this. I can’t argue with that as singer Annabella sings her heart out in an effort to get noticed in a genre typically dominated by males. It takes some balls to do that, the music has to be in your blood!