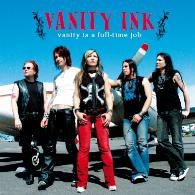 Review:
For over half a year I have been sitting on this disc because I just couldn’t find the proper words to describe it. I’m still not 100% sure what to say about it, but because I like it I’m going to FINALLY write something…anything!

Hailing from Finland, Vanity Ink has returned with their original lead singer Annabella once again in tow. If I had to compare them to anyone from the 80s I would pick Princess Pang simply because Annabella sounds a lot like Jeni Foster. Musically the comparison doesn’t hold up as well because Vanity Ink is heavier, punkier and rougher around the edges.

“Living A Dream” is one of the better songs I’ve heard this year, yet I’m not sure why. Is it the guitar crunch, the powerful chorus or maybe it is the punk yet furious vocals – I’m at a loss, but know I like it. I think what is throwing me off is the fact that this album is a punk/rock hybrid – I hate punk as a rule, but there is enough rock here to pull me in. I also like the fact that the band doesn’t let up at all, songs like “Downward Bound” and “The Drug You Want” have big choruses.

It took me so long to review this damn thing that the group is getting ready to drop a new CD in February! Hopefully the upcoming On Your Skin picks right up where Vanity Is A Full-Time Job left off. In the meantime, check these guys (and girl) out, because as the saying goes…better late then never.