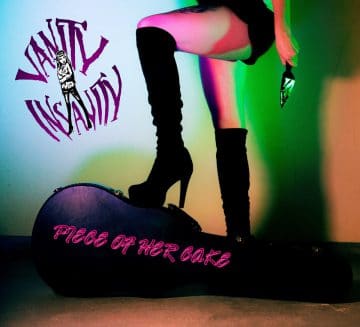 Vanity Insanity‘s Piece Of Her Cake is a return to the glory days of the ’80s. The record screams ’80s from the melodies, sound and Viggo Vain‘s singing, which may remind you of a younger Sebastian Bach with a little less vocal range. There’s such a cool old school feel to Piece Of Her Cake. Vanity Insanity do not offer anything complicated and that’s what makes their debut album so special. Take for instance the track “You Get What You Pay For.” The chorus is simple but infectious — “You, yeah you. You get what you pay for. If the deal is too good to be true, it probably is.” Throw in some great guitar shredding at key moments, a little laughter and some shrieks from Vain and you have that perfect old school feel. Granted, Vain is not the greatest singer of all-time but then again, L.A. Guns‘ Phil Lewis and Faster Pussycat‘s Taime Downe rarely make the list of top lead vocalists as far as I can tell, yet each of their singing is distinctive and you really can’t imagine their respective groups without them. It’s not L.A. Guns without Lewis‘ UK English laced vocal delivery just like it’s not Faster Pussycat without Downe‘s raspy and almost whining delivery. That’s the case for Vain‘s singing for Vanity Insanity. Yes, Vain is not the greatest singer of all-time but his singing adds a distinctive and unique feel to Vanity Insanity‘s sound.

While I am overall really loving Piece Of Her Cake, sometimes the songs could be better pieced together. Case in point the last track “Devil In Me” which middle slowed down portion doesn’t seem to mesh at all with the rest of the song’s faster pace. However, the guitar harmonies earlier into the song are simply amazing and very memorable. Interestingly enough, Vanity Insanity have been around since 2010 but their debut album has only seen the light of day in December 2017, which is seven to eight years after forming. All I can say is that more bands should take the time to hone their craft as Vanity Insanity‘s debut album was worth the wait because there is not one weak track on it. Simply put, every song is a good one. My favorite songs on Piece Of Her Cake are just about every one but if push comes to shove, I will go with the title track, the peppy “Dented Halo” with its memorable chorus and verses, “New Generation” (which was a good pick for a video) and the slower “Under Your Spell” which might make you think that there is a different singer singing that last track.

The one “negative” if you will is that for whatever reason, the album title has led me to confusion over and over. I keep writing and thinking Piece of The Cake when the record title is actually Piece Of Her Cake. One of the Vanity Insanity band members even politely corrected me in that regard when Sleaze Roxx‘s initial article on Vanity Insanity came out last month and I have had to correct the album title throughout this review before posting it. Why not just call the album Piece Of The Cake? Whatever the case, this is a very minor point. Vanity Insanity have come up with an incredible debut album that will take you back to the glory days of the ’80s where listening to sleazy type rock n’ roll was the norm rather than the exception.