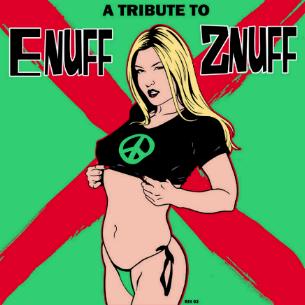 Review:
Enuff Z’Nuff have always been one of the under-appreciated rock bands, and while this tribute shows that they were never the heaviest of their genre it does remind you that the band wrote some extremely catchy songs! This compilation features largely unknown bands doing Enuff Z’Nuff justice by remaining true to the originals, with huge harmonies and melodies. Original Enuff Z’Nuff member Donnie Vie also makes a couple of appearances — although I have never understood how someone could appear on their own tribute album.

With this album it feels as if everyone is doing their best Enuff impersonation without taking any chances. Now some people may be disappointed with this approach, but personally I’d rather have an album with a bunch of copycats then “innovators” that butcher classic tunes. With that being said, there is no way you can listen to this album without tapping your foot and singing along — it is just too damn catchy. dim are flawless on “New Thing” while The Millions recreate Enuff‘s biggest hit perfectly. Best Of Seven display great vocals and guitar work and even managed to convince Donnie Vie to sing backup vocals. Canada’s Crash Kelly plays the mellow “There Goes My Heart” with the same emotion as the original. WWJLD? exhibit a Warrant feel on their acoustic number.

The standout tracks include R50‘s take on “Heaven Or Hell” with its great gritty vocals and killer galloping rhythm section. Barely Pink is perfect on “Ain’t It Funny”, the vocalist has a great delivery and the guitars have an interesting dark sound to them. Finally Donnie Vie himself resurrects an old Enuff Z’Nuff demo called “She Forgets”, and shows this collection of young bands how it is done. There wasn’t one song that I didn’t like, which is a rarity these days. A Tribute To Enuff Z’Nuff can be found at CD Smash.