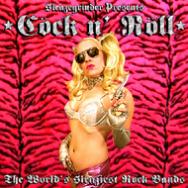 Review:
Our good friends at Sleazegrinder.com have released a compilation album of twenty-six
bands from around the globe that proclaim to “put the fuck in rock’n’fucking roll.” In
other words this isn’t a collection for the faint of heart, with its raunchy artwork
and obscene songs, this album would have been on the PMRC’s hit list if they were still
relevant today (were they EVER relevant??). With close to thirty tunes, there will be
some bands that lag behind, but there is something here for every sleaze fan. The
guitars are cranked, the groups are full of attitude and the songs are filthy, so lets
get to the music.

Lanternjack kick of the compilation with an excellent song.
The Hellside Stranglers display more aggression then anyone here, which is quite
a feat. The Erotics and Sugabomb (who sound like Joan Jett after a
week long LSD binge) stand out because they are of the few with sing-a-long choruses
and commercial potential; most of the other bands are just too raw to ever be accepted
by the mainstream. Big Block Hitchcock remind me of what Kiss would
sound like if they were still capable of writing a kick-ass tune. Rickshaw has
a cool Monster Magnet vibe going on here.

The album is also filled with lyrical comedic moments, such as
Skum‘s “Slut”, which actually had me laughing out loud! Then there is the
Dog Shit Boys‘ “One Minute Fuck” which actually clocks in at 1:52–perhaps they
had/have whiskey dick?

Best vocals go to Bad Dog Boogie (with a close second to the
Speedfreaks, who must eat razorblades for breakfast) who are comparable to the
legendary Zodiac Mindwarp. The Vibrolas get my vote for best guitar sound–
sure it isn’t fast like most of the bands represented here, but who cares when it sounds
this damn good? But out of all these great artists, there was one song that stuck out
above all the rest. That song is “In The Cut” by New York’s Bona Roba, imagine
Mick Jagger doing vocals on Alice Cooper‘s Love It To Death album–it
is flawless!

My advice to anyone that loves sleaze rock, music that is laced with attitude,
is to race over to Sleazegrinder
and pick up a copy without delay. You won’t be disappointed!