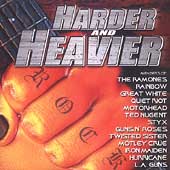 Review:
This could be one of the weirdest compilation albums I have ever received. You have members of bands such as Quiet Riot, Rainbow, Twisted Sister, L.A. Guns etc. covering classic tunes by Led Zeppelin, AC/DC, Guns N’Roses, Def Leppard and more! I find it strange that a guy like Kevin Dubrow would feel the need to cover a song from a band he helped influence. Oh well, as long as the music is good who cares…right? Well that is part of the problem with Harder And Heavier — while it is an interesting idea, musically it is hit and miss.

On the positive side, Joe Lynn Turner does a killer rendition of “Back In Black”, his vocals sound incredible. Jack Russell and Great White deliver as usual (and it sure sounds like Russell singing “D’yer Maker” as well, but it is listed as Phil Lewis), without a doubt they are one of the most underrated of the 80’s hard rockers. Hurricane‘s Kelly Hanson delivers the Scorpions‘ “Here I Am” (better known as “Rock You Like A Hurricane”) with the same urgency as the original. John Corabi tackles Def Leppard‘s “Wasted” and turns in an awesome performance. The biggest surprises are Kevin Dubrow and Phil Lewis doing exceptional jobs on “Welcome To The Jungle” and “Bringing On The Heartache” respectively, they seemed like weird pairings to me, but I enjoyed them both.

After mentioning how well Dubrow did with the GN’R classic, one has to wonder what possessed him to totally butcher “Whole Lotta Love” and “Highway To Hell”? These are supposed to be hard rock staples, not horribly mutilated remix/techno garbage! I had never heard of The Electric Hellfire Club before, and now I know why — was that actually “Shout At The Devil” they were playing? Finally, poor Tommy Shaw — of course I have to say I never did like the song “Money” regardless of who sang it — but his vocals are covered over by so many effects that this version ends up sounding like an 80’s new wave reject. I have to admit that at times I thought this album was amazing, and the next moment I was nauseous — it is definitely interesting.