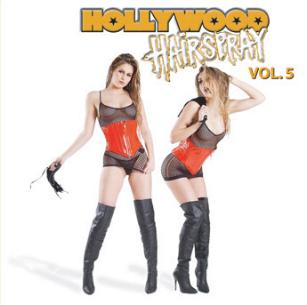 Review:
Perris Records‘ Hollywood Hairspray compilations are without a doubt the best releases coming out these days to promote upcoming hair, glam and sleaze bands. I don’t feel like sitting here and writing on each individual song on Vol.5, so what I am going to do is split the review into three parts. Those parts will be ‘bands I’ve already heard’ (and have reviewed on the site), ‘biggest disappointments’ and ‘most surprising’ – any song that doesn’t get mentioned falls somewhere between the last two categories.

1) Bands I’ve already heard. First up are the RadioVipers, with a song that musically is a cross between Cry Of Love and Brother Cane. Brazil’s Bastardz live up to their name, and even though I would have preferred “Grab Her By The Tail”, you can’t go wrong with these guys. Sweet Cheater does a killer impression of Ratt on this tune, and seeing as JackViper‘s “Merry Go Around” made my list of ‘Top 25 Songs Of 2005’ I really don’t have to say anything more. Now I haven’t heard Chris Laney before, but know him from Zan Clan and Animal. This track is incredible – the vocals have an Alice Cooper sneer while the music has that polished later era Kane Roberts feel. Chris Laney is one man to keep an eye on, he is on fire!

2) Biggest disappointments. I’m having trouble getting into the Rush-like vocals of Hollywood, but the chorus almost saves the song. Snow seems to be trying for an Electric Angels vibe, but just miss the mark. The biggest disappointment however is one of the biggest names represented, Dirty Rig, the new band featuring Warrior Soul‘s Kory Clarke. The song just doesn’t do anything for me at all.

3) Most surprising. Leave it to another Swedish band to impress the hell out of me. On Parole has a Cult meets The Rock United sound and a killer sense of boogie. Silver Dirt plays a cool brand of sleaze meets 70s garage-rock, while Straight Fork gets points for the best song title and their Junkyard blooze metal. For me the biggest surprise is Alter Ego X. A band with a silly moniker but with loud guitars and vocals that sound like Bon Scott wired on crank.

Once again Hollywood Hairspray showcases some great new music, and some bands that I’m going to have to do some searches on. You can pick up this, and the other four in the series, at www.perrisrecords.com. Bonus points for Vol.5 having the best artwork of them all.