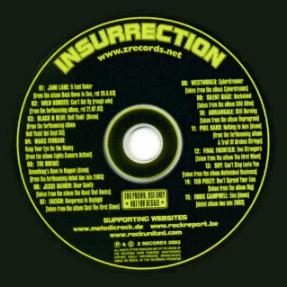 Review:
Insurrection is a promotional sampler from Z Records, showcasing fifteen of their
brightest stars. Like every roster, some songs are excellent while others seem to fall
short.

Jani Lane kicks off the disc with an updated (and very entertaining)
sound, but not so far removed from his trademark sound that Warrant fans will be
disgusted. Wild Horses return after a 12-year hiatus with a song that would
proudly fit onto Aerosmith‘s latest releases, this will be an album to look forward
too. If Black ‘N Blue‘s “Hell Yeah!” is any indication, their return could be one
of the high points of 2003. In fact, this could in fact be the best Black ‘N Blue
song I’ve ever heard! Ex-Keel guitarist Marc Ferrari really shreds on
his tune, which sounds like something you’d hear on the radio from Kenny Wayne Sheppard.

The Brewz are a new band that really impressed me. They play a brand
of highly polished melodic rock, which usually doesn’t interest me much (such as the
Jesse Damon tune), but this song is so damn catchy that the band deserves props
for grabbing my attention. Enzign have an interesting sound on their haunting
seven minute epic “Dangerous In Daylight”. The poor production (it is a demo after all)
hurts the Phil Naro song, but if it’s cleaned up for the album it will be a
great track. Final Frontier sound incredible with their over the top vocal
harmonies and keyboards. Silent Rage, Shy and Ariangale
will transport you back to 1989 with some well-executed glossy hard rock. One time
Danger Danger front man Ted Poley is still kicking out the lightweight
radio friendly rock that will satisfy his fan base.

Head over to zrecords.net
and check out each one of these incredible bands. Thanks to independents such as Z,
hard rock will never die!