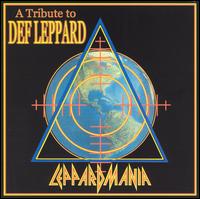 Review:
The first thing I want to mention is my love of Def Leppard. All of these songs mean something special to me. That said, I’m not typically a fan of tribute albums mostly because those who perform them are usually some garage band that nobody has ever or will ever hear of beyond the tribute, plus they just ruin the songs you love. This one however, is different.

I saw Jizzy Pearl was on the album. When I saw his name as well as Phil Lewis and Jani Lane, I knew I had to check it out. I’m so glad I did. It reeks of awesomeness!

John Corabi (Ratt, Motley Crue and Union) did a good job with “Wasted.” I’m not a big fan of the original version of this song but John breathes new life into it.

Joe LeSte (Bang Tango, Beautiful Creatures) performs a dandy version of “Rock Brigade.” LeSte‘s sleazy voice is perfect for this song adding a very sleazy feel to the song. You’ve got to love it!

Jani Lane (Warrant) performs “Photograph” in a version I feel is far superior to the original. This version is so good, Warrant included it on a recent “best of” collection!

The closest thing to a “let down” was “Rock Rock” by Kevin DuBrow (Quiet Riot). Kevin belts it out, but they techno that song up. It sounds like something you’d hear at a club with a metal singer belting it out rather than computerized vocals. I still like it because Kevin sounds strong and into it, but if the song’s called “Rock Rock”, it should Rock Rock, not Techno Techno.

Stevie Rachelle absolutely belts out “Too Late For Love.” I must admit I’ve not heard a lot of Stevie‘s work as Tuff albums are not easy to find in Sam Goody these days. If his vocals on this song are any indication, I must get on eBay and buy some albums! He has this pure metal voice on this song, belting out “Too Late For Love” with far more feeling than even Joe Elliot!

Steve Whiteman (Kix) performing “Foolin'” is another winner. Being a Kix fan, I really enjoy Whiteman‘s voice. Combining the crunching guitar work bringing Def Leppard to a new stage of hard rock and updating the songs combined with the vocals of singers, like Whiteman, who have produced hits previously and are capable of doing it again really makes so many of these songs so enjoyable to hear.

Kelly Hansen (Hurricane) is next with his version of “Rock Of Ages.” As I just said, this album really takes the songs into the new millennium. Kelly‘s voice is as strong as ever and the loud and crunching guitar breathes new life into this somewhat played out cut.

Phil Lewis (L.A. Guns, Girl) performs “Bringin’ On The Heartbreak” very well. As I type this, I am in an L.A. Guns t-shirt and consider myself about the biggest L.A. Guns fan there is. Hearing Phil perform this song fills me with pride.

Jason McMaster (Dangerous Toys) also did a fantastic job with “Let It Go.” I was truly shocked by how good that version was, as it takes a song that is heavy in nature but has the Def Leppard not quite heavy guitars in the original — this is heavy and oh so deviant! It topped the original in my opinion!

Jizzy… Jizzy Pearl (Love/Hate, L.A. Guns and Ratt) can take any song and make it grand in my opinion. A great version of “High ‘N’ Dry” is delivered on this record.

The album closes out with the vocalists from Space Age Cowboys and Rough Cutt doing fantastic jobs with “You’ve Got Me Running” and “On Through The Night” respectively. I originally did not listen to these tracks much but left the CD on as I worked and caught them recently and really am glad I gave them a chance. Fantastic vocals and great guitar work.

There is no bad song on the CD!

Ultimately, this is a rock tribute to Def Leppard. Many of the participants of this tribute album went in and did a rock tribute to KISS more recently. So, you’re not going to get the more “pop” Def Leppard that some fans want. You’re going to get the rocking Def Leppard, the only Def Leppard I acknowledge. One reviewer called this album “lame” saying the vocals and guitar work aren’t very good. I also happen to know this reviewer is a Britney Spears fan so that should tell you what they know about music. Basically, if you’re a fan of true metal or just love Def Leppard, give this album a spin. It’s a great tribute!