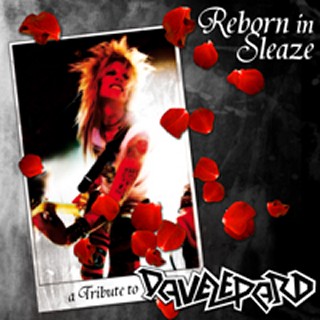 Review:
It was the news that shook the entire CrashDiet fan base across the globe — the band’s frontman David Hellman (A.K.A. Dave Lepard) was found dead on January 20th, 2006. He had committed suicide following his battle with drug addiction, resulting in a deep depression. But since then, all existing members — with the addition of vocalists H. Olliver Twisted and later Simon Cruz — have continued to make music as a band and keep Dave Lepard‘s legacy alive. Limited to just 200 numbered copies, Reborn In Sleaze: A Tribute To Dave Lepard showcases 11 bands — and although it is easy to appreciate the concept and the integrity behind the release, it is unfortunate that some tributes’ are patchy at best. Nevertheless, most bands featured are relatively new to the scene and part of the earnings made off this CD goes to the ‘Dave Lepard Memorial Fund’ in support of young musicians.

“Knokk ‘Em Down”, the opener, is covered by Italian hard n’ heavy band Midnite Sun and comes beefed up with a much heavier musical arrangement. It’s a lively version and would make for a good warm-up if this was a live ‘tribute concert’. Speed Stroke‘s “Riot In Everyone” begins with a stomping, crunchy bass intro and continues on with squealing melodic guitar riffs. The track’s only flaw is frontman Jack‘s vocals, which at times, feel slightly forced. Italian sleaze outfit Skull Daze aren’t messing around with their monster cover of “Queen Obscene/69 Shots”. This track dishes out unexpected surprises, because although it feels fresh, the arrangement is actually fairly close to the original and vocalist Johnny Rainbow hits notes hard, harsh and wild.

“Breakin’ The Chainz” is where the magic truly kicks in on this album, and possessing the no-half-measures syndrome is Scottish sleaze-glam quartet PeepShow, who serves Lepard proud here. Johnny Gunn‘s vocal efforts confirm that when his band set out to do something, they do it well. This is a band set for big things in the future and Peep Show is a name to watch out for. With a band named Superhorrorfuck covering the bad ass original “Needle In Your Eye”, you would think that expecting something heavy would be reasonable — and you would be right. Think of an extremely pissed off Lepard singing in a slightly ‘death metal’ voice and you’re getting close. It rocks hard and heavy — and this is the case for Ragdolls‘ ‘Tikket’ as well.

Cyanide 4 sleaze things up and slow things down in “Out Of Line” (the lyrics to this song prove a fitting match for this band) as the beautiful, low key guitar synth intro gives you absolutely no warning of the hellacious direction this track takes immediately following the intro’s conclusion. This is one of the few tracks on Reborn In Sleaze that portrays melody and hook-laden riffs in sheer beauty. It is an impressive and revised contribution, the guitar solo by Joxnyy Slut — who certainly knows how to play his axe — screams Martin Sweet at you and frontman G.A Sinn hits every lyric with sentiment. DNR prove to be an unpolished gem with “It’s A Miracle”, and although the foundations are there and sleaze atmosphere maintained, the track lacks in auto-tune to a high degree.

Hell In The Club takes “Straight Outta Hell” into a new dimension of sleaze, adding their own Italian metal twist — the minor changes to the arrangement made by the band (mostly in the guitar riffs) work really well. This killer cover is racing with shit-loads of energy and the band’s singer, who is also named Dave, salutes Lepard through clear harmonic influence. The trilling guitar riff at the end unites with a pulsing bass line and charging drum beat that together, produce fireworks that end in one big unforgettable bang. Shining Line‘s “Back On Trakk” swerves slightly off ‘trakk’ with its karaoke efforts, but gospel flavored backing vocals add a new twist to the album’s original. Nevertheless, ending on a perfect note, Blackrain approaches overture on “Lost Horizons”, melodically and sincerely. The album couldn’t have ended better if it had tried — having a tissue handy when streaming this track is a good idea. Sang in the form of Dave Lepard, vocals soar so high and so sweet that they’ll pull at the heart strings of listeners for sure!

The CD comes with a heartfelt note written by American journalist Brian Rademacher… I won’t ruin this for you, I’ll just let you go and buy the CD and read this magical note for yourself. Although not every riff on this re-make screams ‘Jackpot Baby’, the simple reason for that is Dave Lepard is a hard act to follow and unlike its predecessor, there aren’t many avant-garde epics on this album. But that aside, after a few listens, you start to see just how much passion and effort has gone into remaking each and every single ‘trakk’ on this album. R.I.S. Dave Lepard… Gone but not forgotten (1980-2006).