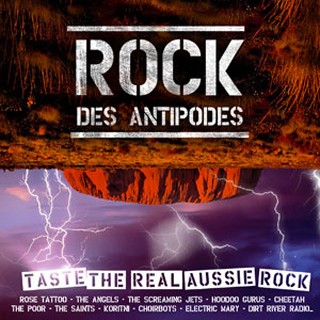 Review:
For a country more less alone on the bottom of the Earth, Australia has developed one of the most unique and plagiarized sounds ever — thanks to countrymen AC/DC. While the Young brothers were the innovators of this sound, and reaped the commercial benefits, they were hardly alone. As the Rock De Antipodes compilation displays while covering the history of Aussie rock ranging from 1977 to the current-day, there is more to the ‘Down Under’ scene than two brothers and three-chord guitar riffs. In actuality, the Australian scene consists of several hard rockers… with three-chord guitar riffs.

Such a collection of boogie driven rock anthems hasn’t been assembled since… well, the latest Rhino Bucket or ’77 releases, and kicking it all off is the underrated Rose Tattoo with their 1978 ass-kicker “Rock’N’Roll Outlaws”. I’m not sure how the Rock Gods can justify making AC/DC household names while Rose Tattoo wallowed in obscurity, as both were worthy if massive success — but such is life. The same can be said about The Angels with their offering “Marseilles”, a track that has been covered numerous times throughout hard rock history.

The first of the newer breed on Rock Des Antipodes is Koritni, who not only pay homage to their influences, but often beat them at their own game. The Choirboys from the mid ’80s are much the same — sounding great but lacking the originality needed to capture a larger audience. Meanwhile Hoodoo Gurus switch things up ever so slightly by adding an element of Rolling Stones inspired rock to the Aussie sound before The Screaming Jets bring everything back in line with a healthy dose of energy.

The female fronted Cheetah is an interesting band as the duo of Vanda/Young (if you don’t know who they are you may have stumbled onto the wrong website) wrote their 1982 contribution “Rock’N’Roll Woman”, meaning they had the AC/DC sound down pat. Relative new comers Hellcity Glamours have a convincing retro vibe during “One Night Only” while Electric Mary takes a similar approach but speeds everything up. Then come The Poor with their hit “More Wine Waiter Please”, arguably the best single to come out of the kangaroo infested country that didn’t involve a guitarist wearing shorts. Rounding out this entertaining collection is one of the album’s highlights courtesy of The Casanovas, who sound like… yeah, you know — but with a horn section!

Aside from Dirt River Radio, the trippy Powderfinger, and the mellow 70’s rockers The Saints, who all sound completely out of place on this compilation, Rock De Antipodes is a disc filled with tracks that would get barroom patrons around the world up in their feet. Australia may not have a monopoly on the sound featured throughout this CD, but I can’t think of another country that has mastered this type of music as consistently and for as long — it must have something to do with wallabies shitting in the water supply.