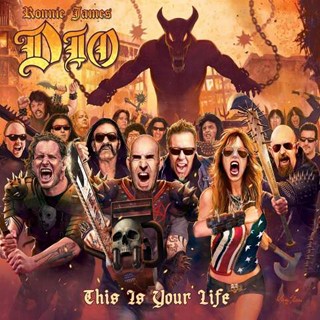 Review:
Every time various hard rock and metal artists team up to offer a tribute CD I look forward to it, even though I know most of the songs covered will be hit or miss — and in most cases end up falling into the latter category. The deceased Ronnie James Dio is the latest artist to get the tribute treatment, unfortunately most of the songs do not live up to the diminutive but powerful sounding vocalist’s original versions. In fact, unlike the Thriller – A Metal Tribute To Michael Jackson CD that I recently reviewed, where I found that one track was actually better than the King Of Pop’s own version, I find that none of the tribute songs offered on This Is Your Life improve upon or better Dio‘s originals. It is not that the performances on This Is Your Life are bad — although there are a few stinkers — it is simply that Dio had such a great voice that the various vocalists, for the most part, cannot touch what he brought to the table.

It is easier to start with the good songs on This Is Your Life because there are really only a few. Halestorm, who have already pulled off two worthy cover EPs of their own (including the recent ReAnimate 2.0: The Covers EP), come close to matching the greatness of Dio‘s version of “Straight Through The Heart”. Lzzy Hale has successfully taken on classics from some of metal’s best and most distinctive lead vocalists, including Rob Halford and Axl Rose in the past, so it is no surprise that Halestorm end up with one of the best songs on This Is Your Life. The best tribute song though comes from metal giants Metallica, who play a spirited medley of four slightly more obscure Dio compositions — “A Light In The Black”, “Tarot Woman”, “Stargazer” and “Kill The King”. James Hetfield‘s voice, and Metallica‘s overall heavy sound, is really what makes the medley so good.

Adrenaline Mob‘s rendition of “The Mob Rules” and Anthrax‘s version of “Neon Knights” sound pretty good, but let’s face it, it is hard to fuck those songs up. Both are straightforward rockers and any singer with a half decent voice could have pulled them off. What makes Adrenaline Mob‘s version quite good is the guitar solos and shredding throughout the song, which really add to it.

The most disappointing efforts on This Is Your Life have to go to Tenacious D‘s version of “The Last In Line”, Doro‘s rendition of “Egypt (The Chains Are On)”, and “Catch The Rainbow” performed by vocalist Glenn Hughes and former Dio members Craig Goldy, Rudy Sarzo, Scott Warren and Simon Wright. I had never heard of Tenacious D before and was almost horrified to see that actor Jack Black was one of the two people handling the vocals — in my eyes Black has not earned his spot on This Is Your Life unlike the other performers. The slower intro to “The Last In Line” is passionless, and even though the vocals pick up once the song gets heavier it completely loses my interest when the guitar solo is replaced by what sounds like some sort of flute for about 30 seconds — who came up with this monstrosity? A couple of years back, I had heard Doro play “Egypt (The Chains Are On)” on a video and it sounded pretty good, but her version of the song here is unfortunately boring and slow. Finally, “Catch The Rainbow” is likely the worst on This Is Your Life — enough said.

The list of disappointing songs on This Is Your Life does not stop there. The Scorpions‘ rendition of “The Temple of The Kings” is pretty dull — perhaps because I am tired of Klaus Meine‘s voice, which is one of those love or hate types. I used to love his vocals, but over the last ten years have grown quite tired of them. Perhaps the most surprising vocal performance is Rob Halford‘s version of the classic Rainbow song “Man On The Silver Mountain”. I was expecting so much more from the ‘Metal God’, including him ripping through such a great song, but for the most part it sounds like he is singing in only one key and from his nose. I hate to insult a man when he is no longer with us, but the title track to This Is Your Life is a sappy Beatles sounding ballad and one of the worst Dio tracks I have ever heard. It almost feels like the song was not finished and simply released so that there would be a track from Dio on this album.

Is This Is Your Life worth purchasing? I say yes, given that there are a few really good songs — the CD artwork painting looks amazing, the booklet itself is really cool with a photo of almost each performer with the late and great Ronnie James Dio, and a portion of the funds generated from the album will go to charity (which in this case is The Ronnie James Dio Stand Up And Shout Cancer Fund). By the way, if you are looking for a really good Dio tribute album pick up Jorn‘s Dio.