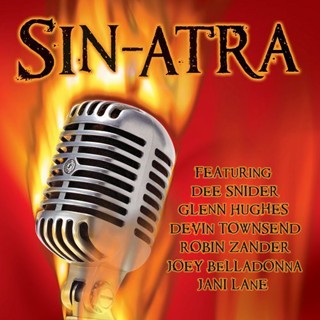 Review:
In many ways, the work of a critic is easy. We risk very little yet enjoy a position over those who offer up their work and their selves to our judgment. We thrive on negative criticism, which is fun to write and to read. But the bitter truth we critics must face, is that in the grand scheme of things, the average piece of junk is probably more meaningful than our criticism designating it so. — Anton Ego, 2007

Alas, this collection of interpretations of Mr. Frank Sinatra‘s work is fully deserving of every ounce of ridicule that is directed at it — Jesus Fucking Christ it’s bad. Sinatra was the undisputed ‘King of Swing’, and Ol’ Blue Eyes must surely be rotating at quite a pace given the abomination of this release bearing his name. Just to be clear, this album has no redeeming features whatsoever. None. Not one. Nada. Zip. Zilch.

Kicking off with Devin Townsend‘s abortion of “New York, New York” and winding up with Jani Lane‘s car crash that is “That’s Life”, SIN-atra is without doubt the worst album I have ever had the misfortune to hear… and I’ve heard Bon Jovi‘s Bounce! This is the album version of nails down a blackboard and I would rather dig out my own spleen with a rusty spoon than have to listen to this CD ever again.

Dishonorable mentions must go to Geoff Tate, Glenn Hughes, Joey Belladonna and Dee Snider — all of whom I hope have spent many troubled nights of restless sleep after committing such aural atrocities. Robin Zander‘s rendition of “Fly Me To The Moon” is so bad that I actually considered playing some Stryper instead.

Frank Sinatra‘s music — or rather the Big Band type sound he is associated with — is full of swing, crooning and oozing with Rat Pack cool. These offerings from artists who, frankly, should know better have robbed these classic tunes of any semblance of said cool. For shame… Glenn Hughes‘ version of “I’ve Got You Under My Skin” is particularly abrasive, it’s about as good an idea as say, ohhh, I don’t know… applying a cheese grater to your scrotum?

Every single person involved with this album should be made to sit down and listen to the fucking thing — I had to for Christ’s sake!
If you were thinking of spending any of your hard earned cash on this… don’t. Spend the money on booze or drugs, that way you’ll have ensured you haven’t completely wasted it.