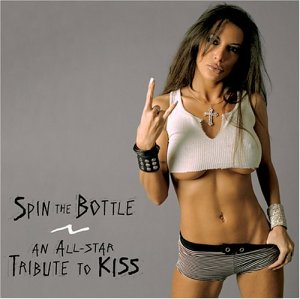 Review:
It’s been over 30 years since the painted performers dropped their debut self-titled record on the World. That record was a pure blend of Beatles inspired rock mixed with a style all their own. The Demon, Space Ace, Cat Man, and Star Child have delivered nothing but the best rock ‘n’ roll and attitude since day one and never danced around with N Sync or did rap songs to keep their name alive. They are America’s greatest rock band and I defy anyone to tell me differently. So, you wanted the best? You’ve got the best! Artists from the best genre in rock ‘n’ roll history gather to pay homage to the hottest band in the world! KISS!

Several albums have come out over the past few years paying tribute to bands like Def Leppard, the Scorpions, Guns N’Roses, Twisted Sister, and Bon Jovi. I’ve found the good and bad in all of those tributes. I find good and bad in this one as well. But, my review won’t use the phrase “hair band” in a negative light. Hair is and was the best music ever created! Instead, I’ll just tell you what is actually good and bad without stereotypes. This should be proof I’m not employed by a music magazine. This puppet has no strings!

Dee Snider of Twisted Sister fame belts out a grand old version of “Detroit Rock City”. Paul Stanley has a voice that is hard to replace and I am a traditionalist in that I am all for staying true to the original tune. Dee deviates a few times, but nevertheless performs a true version of a true classic. This one is Aces with me. I give it 5 Star Children!

Styx’s Tommy Shaw performs “Love Gun” rather well. Tommy sounds incredible! The bad? There are a few missed portions of the song’s musicianship that I enjoy. The guitar solo, for example, doesn’t have the impact of the original or the KISS Symphony version. Does it ruin the song? No, but it does keep it from being Aces! I give it 3 Star Children!

Mark Slaughter of Slaughter absolutely nails “Cold Gin”. The man can sing and all involved in the musicianship of this song should take a bow once for me! This was far and away the best cover on the album! It makes me look forward to catching Slaughter on the road this summer! Aces! I give it 5 Star Children!

WWE superstar and Fozzy member Chris Jericho performs “King Of The Night Time World” with Fred Coury of Cinderella fame jamming on the drums! Jericho has called himself the “King of the World” on WWE TV several times and does Paul Stanley‘s famed spin move in his entrance, so this was just a natural fit. I like it, though I feel Chris may have held back a tiny bit at the end instead of trying to reach the stratosphere vocally, pun intended. Not aces, but not bad! I give it 3 Star Children!

Kip Winger cranks out a cool version of “I Want You”. This is my personal favorite early KISS song. Kip sounds great and tries very hard to create the energy Paul Stanley does when he performs the song. The negatives? Over production! There is no reason to have the “I Want You” repeated during the guitar solo and there certainly was no reason for the echo effect to be so prominent. I give it 4 Star Children just for Kip doing “Ba-ba-ba-ba-babe I want you” so well!

Page Hamilton performs a fine version of “Calling Dr. Love”. Great musicianship, okay vocals. The band stayed true to the original song and just made it sound heavier. I’m all for that! I give it 4 Star Children!

Buzz Osborne performs “God Of Thunder” with Bruce Kulick jamming on guitar. I have a very faint idea who Buzz Osborne is and frankly I doubt I’ll go on a mad CD search to find out who he is. His voice fits the song well, though! Gene Simmons should be impressed! But, the lack of the driving drumbeat that the song is noted for is noticed. I give it 2 Star Children.

Lemmy from Motorhead performs “Shout It Out Loud”. What a let down! They changed the tempo of the song completely and it just does not work. I love Motorhead, but this just doesn’t cut it. I give it 1 Star Child.

King’s X‘s Doug Pinnick performs “Parasite Lady”. Good version, though it’s not going to knock your socks off. I give it 3 Star Children.

This next one is another one getting a ranking of Aces! Phil Lewis of L.A. Guns, Jeff Pilson of Dokken, and Gilby Clarke of Guns N’Roses perform “Strutter”. Phil sounds grand as always, barring any George Lynch borderline garage band recordings that are released as professional albums, same goes for Jeff. Slightly overly produced but it is just too cool to bash. I give it 5 Star Children!

The album wraps up with Aces! MSG‘s Robin McAuley, C.C. DeVille of Poison fame, Tony Frankin of Blue Murder and Whitesnake, and Anysley Dunbar of Journey and Whitesnake positively knock you out with an amazing version of “I Stole Your Love”! For those who were disappointed in Poison‘s last CD titled Hollyweird, check this one out! Robin belts out a very Bret Michaels inspired “guitar” right before the solo! You’ve got to love that! I give it 5 Star Children!

So, lets tally up the total of Star Children! By my calculations, this album received 40 of 55 possible Star Children. I guess that’s good enough for a smiley face sticker, or a half naked girl cover!

A DVD accompanies the CD in specially marked packaging. It features interviews with most of the guys telling their KISS thoughts or stories. As far as free stuff goes, this is Aces with me!

People forget KISS is not just a look but a collection of great songs as well, melodic hard rock and heavy metal that will live forever in the annals of time because they stayed true to themselves. I’m 22 years old and I’m part of the new generation of KISS fans that will keep these guys on tour another 30 years, God willing! Bottom line, this CD is pretty cool.