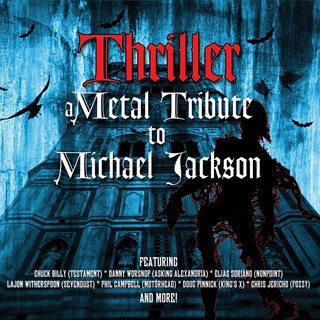 Review:
It’s safe to say that most people would choose Elvis Presley and The Beatles as the most influential music artists in the last sixty years. Third spot would have to go to Michael Jackson, who revolutionized pop music with his 1982 album Thriller — which still holds the top spot for best selling album of all. One might be surprised to hear that metalheads enjoy Michael Jackson, however given how many albums the ‘King Of Pop’ unloaded during his tenure — over 150 million copies based on his top five selling albums alone — it is no surprise that members from the hard rock and metal community would team up to deliver a covers album featuring some of Jackson‘s greatest hits.

Ironically, Thriller was the first album that I ever got, so I know the songs quite well and feel that I am in a good position to compare Jackson‘s original versions to what is being offered on Thriller – A Metal Tribute To Michael Jackson. For those of you wondering how I could be a Michael Jackson fan while providing reviews for Sleaze Roxx, everyone has to start somewhere when being introduced to music before gravitating towards their genre of choice. In any case, with artists such as Testament‘s thrash metal titan Chuck Billy to bassist Rudy Sarzo (who has played with some of the greatest metal bands around including Ozzy Osbourne, Quiet Riot, Whitesnake and Dio) covering the ‘King Of Pop’s songs, I am in very good company in terms of metal-heads enjoying what Jackson had to offer.

I will say that each of the artists who tackle Jackson‘s compositions have, for the most part, a tough act to follow. There is only one track that I feel is an improvement over what the original delivered — and the Grammy goes to ex-Iron Maiden vocalist Paul Di’Anno and former Dio/current Dio Disciples axeman Craig Goldy with their blistering version of “Bad”. Di’Anno delivers an aggressive vocal performance right from the start, something that was always missing on Jackson‘s version, and Goldy‘s guitar solos are ripping throughout the entire song.

Other tracks that come close to measuring up to Jackson‘s originals include Icarus Witch‘s excellent rendition of “They Don’t Care About Us”; “Rock With You” featuring King’s X frontman Doug Pinnick‘s bluesy vocals; the heavy yet grooving “The Way You Make Me Feel” delivered by Fishbone singer Angelo Moore, Whitesnake guitarist Doug Aldrich and Sarzo; Chuck Billy‘s heavy rendition of “Thriller”; and Alien Ant Farm‘s version of “Smooth Criminal”. Of note is that only two songs were performed by a group as a whole — Alien Ant Farm and Icarus Witch — and perhaps the familiarity between those band members explains why this resulted in two of the best cover versions on Thriller – A Metal Tribute To Michael Jackson.

The rest of the tracks aren’t necessarily bad but simply do not measure up to the ‘King Of Pop’s original versions. Disappointing covers include “Man In The Mirror”, due especially to Asking Alexandria vocalist Danny Worsnop‘s flat and monotone delivery throughout most of the song, and “Billie Jean” which does not showcase in any way just how much of a brilliant vocalist Living Colour‘s Corey Glover really is — perhaps Glover should have just picked another Jackson song to cover. While I enjoy hearing a female vocalist, in this case Diemonds‘ Priya Panda, tackle the classic “Beat It”, the guitar work by Guns N’ Roses‘ Ron “Bumblefoot” Thal leaves a lot to be desired on the song. Although Eddie Van Halen only played a very short guitar solo in the original version of “Beat It” it was memorable, while Thal had an entire song to deliver a worthy performance but does not deliver. Other disappointments include Fozzy frontman Chris Jericho‘s dull and almost conversation like delivery of “Dirty Diana” and War singer Lonnie Jordan‘s bluesy and boring version of “Never Say Goodbye”.

At the end of the day, Thriller – A Metal Tribute To Michael Jackson is a fun album to listen to and more than anything shows the reach and impact that the ‘King Of Pop’ has had on the music industry — including the metal community.