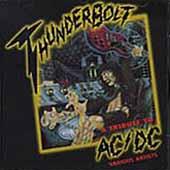 Review:
You’ve heard all of these songs many times before, but never like this! The greatest names in heavy metal get together and put together a scorching tribute to one of the legendary bands of all time, AC/DC. It’s a who’s who of heavy metal, some bands, and some individuals together in a group you could only dream about, putting their personal touches on some of rock’s all-time classic hits. Here’s a run down on who plays on each track:

There’s not a bad track on the disc, but for some reason if I had to pick the lesser of these 12, it would be “Back In Black”. And that’s a hard pick, almost like choosing a million dollars in twenty or fifty dollar bills. Jack Russell sounds like he was born to sing “Sin City”, Dee Snider absolutely slams “Walk All Over You” and his backup band, Anthrax, are awesome on this track. Whitfield Crane does an eerily-close sounding Bon Scott on “Ride On”, almost if he was channeling the legendary singer. Tracii Guns absolutely shreds his six strings on “Whole Lotta Rosie” and it sounds as if Stephen Pearcy took singing lessons as he nails the vocals on this track.

This back-slapping, ass-kissing fest could continue, but you get the idea. If you even slightly like AC/DC, and I mean come on, who doesn’t, this is a disc you have to have, tribute album or not! We’re talking vital parts of Twisted Sister, Ratt, Quiet Riot, Def Leppard, Dokken, Great White, Motorhead, L.A. Guns, Motley Crue, Y&T, Anthrax and a whole lot of other rock icons all on one speaker blowing CD. This, boys and girls, is an absolute no-brainer!

Hey, if you needed another reason to add this disc to your collection, it’s noted inside the CD jacket that “a portion of the proceeds from this album will be donated to the pediatric AIDS foundation.” ‘Nuff said!