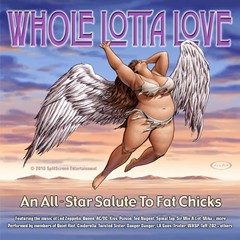 Review:
The brainchild of SplitScreen Entertainment (who also brought us a Vinnie Vincent tribute awhile back), Whole Lotta Love: An All-Star Salute To Fat Chicks is, obviously, a tribute to the fuller figured woman that contains several cover songs and a few original numbers.

L.A. Guns frontman Phil Lewis sets the scene, and grabs my interest straight away, by opening with a great cover of Queen‘s “Fat Bottomed Girls”. Things carry on well with a ‘sounds-just-like Bret Michaels‘ rendition of Poison‘s hit “Unskinny Bop” performed by Evick — these guys are better known as the Bret Michaels Band, so the similarities between both versions are understandable. Quiet Riot members Frankie Banali and Alex Grossi collaborate with songstress Celisa Stratton to put their own spin on Led Zeppelin‘s “Whole Lotta Love” and conjure up an atmospheric and smoky feel as Stratton‘s soulful voice is perfect for this type of thing.

I’m usually hard pressed to find anyone who covers AC/DC well enough for my liking, but Rufus Fontain (with Cinderella‘s Jeff LaBar) do a pretty decent job of “Whole Lotta Rosie” while “Big, Fat, Sexy Mama”, by a group I’ve never heard of called Triangle Exception, have vocals and a whole vibe that reminds me of The Rolling Stones.

Whole Lotta Love: An All-Star Salute To Fat Chicks is a very mixed bag of genres with a bit of everything ranging from the pop sounding cover of the Electric Boys‘ “All Lips N’ Hips” (courtesy of Danger Danger‘s Ted Poley), to the jazz infused “You Need A Great Big Woman” to the rock/funk fusion groove of “BMW”. Hip-hop even rears its ugly head on the stinker “Baby Got Back”, a cover of the Sir Mix-A-Lot hit — I could definitely do without this track. Comedian C.C. Banana reworks KISS‘ “Spit” into “Split”, and even though he sounds a bit like Gene Simmons, should probably stick to comedy.

It’s might be a good idea to listen to some of the song samples to better inform yourself before purchasing because this one won’t be for everyone — but I’m actually surprised how much I’m liking the diversity of the music styles contained on the album. Sometimes it pays to think outside the box and try listening to something different, and all of these songs sure are. Whole Lotta Love: An All-Star Salute To Fat Chicks would make a good Christmas stocking stuffer — if you can find one large enough to hold all the ‘bigness’.