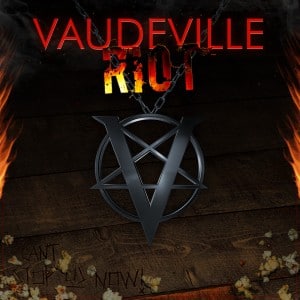 Review:
Well, this is a welcome surprise for me. After a bit of dry spell, it seems LA has a submission in the sleaze rock department. Although I feel Sweden has (so far) a lock in that category, with Vaudeville Riot crawling off the streets of the Sunset Strip, they give their take on the genre and they do a dang good job. They come as a cross between Sister and Danger with sprinklings of US ’90s style glam, like Legs Up, Guttersluts and Liquor Sweet. They have the sound, feel and attitude in their songs that is spot on. I may be superficial or have too much of a soft spot for the flash, the color and sparkle of the glam look but sadly, this band doesn’t quite have that image, from what I can tell. However, this is just me and this doesn’t hinder the music at all, because man, they had me moving.

Vaudeville Riot‘s EP Can’t Stop Us Now kicks off with the title track. It’s just straight attitude and sleaze rock with vocalist Raphael really conveying the mood in his voice and phrasing. I just love the snarl that he has. “Love Is Dead” kinda has an early Mötley Crüe feel with the shouted gang vocals on the chorus and makes you think of “Looks That Kill.” This is not a knock on Vaudeville Riot at all. I think with Mötley calling it quits, we get somebody that can fill that musical void, and help those that yearn for this type of sound. The next song “Skull N’ Bones” — which is not quite a ballad but an electric acoustic song of sorts — brings to mind Bangkok Shok and their song “Dead And Gone Electric.” It’s a good change of pace and listen to that full electric solo near the end — love it! The production is sufficient and you can hear all the instruments with the guitar of Beau Briggs a bit higher in the mix, but with the songs and attitude of the band, this is just right.

When I listen to this album, I get a lot of memories of the cassette demos of the early days from some of my favorite bands — the rough sound, the energy and conviction. It’s all here as well. The song “Now You’re Mine” is where I get a lot of the LA glam feel  — almost poppy in its approach. Listen to the sing-along chorus at about the 3:00 minute mark. It is definitely a live favorite — well, I’m not sure, but I’m assuming so — but it could get the crowd into it. The EP ends with their slogan song of sorts “Vaudeville Star.” Again, great feel and attitude with the sing along shouted choruses. Drummer Drex carries the song with a bit  of a faster pace, making for an energetic finish to a “riot”  (yeah, sorry) of an album.

Vaudeville Riot‘s Can’t Stop Us Now EP is definitely worth $1 at the group’s Bandcamp site and in order to give the band the support it needs for a full-length release!

Reviewed by Will “Bones” Lee for Sleaze Roxx, March 2016