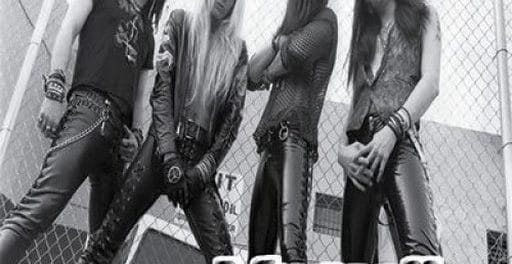 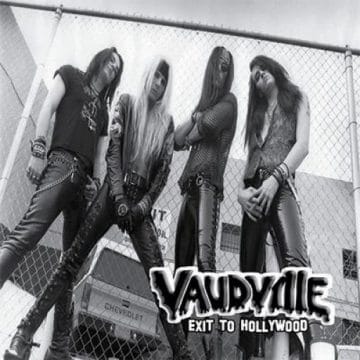 Review:
If you are avid reader or visitor of this site, you are aware of the different web-based storefronts selling revitalized and enhanced reissues of long-lost glam, hard rock and/or AOR gems from the past from Perris Records being there at the beginning, along with Demon Doll Records, Rock Candy Records and of course FNA Records. They have amassed quite a bevy of unreleased, unseen (for many) releases but also hidden gems, coveted by those that lived in the day and tasted the auditory pleasures of the glam rock heyday. One of these bands that gained quite a following on the Sunset Strip glam explosion (I know, there was both good and bad) was Vaudville.

Forming and being a bit more prominent in the tail end of the mass of hairspray and pose(uer) ridden Hollywood strip era and featuring a pedigree of former members of Rated X and Juicy Miss Lucy, it gained them a bit more of a step up from the masses. Of course, having the looks didn’t hurt either and this being Hollywood — if you had the image as well as the songs to make it in the day — you were on the road to success (with some exceptions of course).

Vaudville had the sound of equal parts Mötley Crüe, Sister/W.A.S.P. and Witch, they had a harder edged sound, that differed a bit from some of the LA bands at that time, but along with fellow LA street brethren Legs Up, Liquor Sweet, they had that more metallic sound. The album kicks off with “Devil In You” and you can hear the heavier sound from the onset. The shouted vocals on the chorus and the vocals of Steevi Jaimz look-alike Doug Marks is 90% Vince Neil and a 10 % nod to Blackie Lawless. I say this because his vocals are not the candy coated, bubble gum glam variety, but rougher with an attitude.

For the most part, the songs range in the typical party rock anthems of the sex, drugs and rock n’ roll vibe, but in that day and age that ruled the streets and the airwaves, it didn’t need to be rocket science. If it rocked and it made you feel good and the next day you were dying your hair multi colors, well, that was all that matters. As expected with some bands and this approach with the songs, the test of time does not carry over very well with some bands and songs can be cringe worthy when listened to now. Some of those unearthed songs may make you wonder why you liked such and such a band in the first place but remarkably I feel Vaudville’s songs hold up quite well. The rampant, in your face energy of track “Gimme Good Love” makes a clear point. The ballad of sorts — “Goodbye” — adds a check mark of a required song for the era. I like that with this release, you can hear the bass in the mix, giving a good bottom end groove to the songs. Listening to the song “Love Is Thicker Than Blood” has just that where the bass powers the song through for the most part. Also, the song has an interesting rhythm and vocal pattern, so I find this song to be one of my faves.

The album, obviously being recorded in the early ’90s, consists of two demos from their career and the sound quality is a tad muffled, but nothing detracting. Speaking of sound quality, the release contains three previously unreleased tracks, where the sound quality is a bit more evident as being a demo/rehearsal tracks. The drums almost sound programmed in nature, and I doubt they are, but the songs give a glimpse of what Vaudville sounded like in the rough stages.

This is definitely a solid release from the FNA gang and a worthy addition to the fans clamoring for the songs and feel of the good old days. If I have one gripe, it is just wishing to see a full-color cover, but that’s just me and my own perfect glam world. Give a listen. You won’t be disappointed.

Reviewed by Will “Bones” Lee for Sleaze Roxx, February 2017