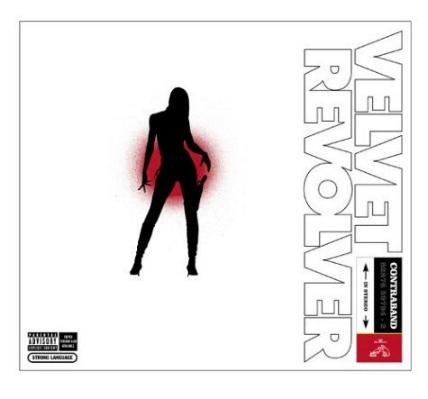 Review:
Slash, formerly of Guns N’Roses, is an amazing guitar player. Who will ever forget his work on “November Rain”? The guitar from that video is forever burned in my memory, as I was amazed at how cool the solo was. Joining this young rock legend is Scott Weiland of Stone Temple Pilots.

Scott Weiland cannot sing, lets dispel that myth right now. He mumbles in a drug induced slur to turned down guitars. I had hoped he would improve and actually try to have a little energy in his voice since he is playing with a real rocker. He doesn’t.

When you pit a real rocker like Slash with a poser like Scott Weiland, you get more poser rock than real rock. Welcome to Velvet Revolver.

I picked up the Velvet Revolver record about a week ago with low expectations. I have tried to give it an opportunity to impress me by playing it over and over. Sometimes an album can grow on you. This is not one of those times and even low expectations were not met.

What subtracts from the record? First, the guitars are turned down for the most part. Not volume wise, tone wise. Guns N’ Roses had somewhat high-pitched guitar and high energy. Stone Temple Pilots had guitar work much like this and about as up beat of a message. Simply put, this is not Weiland learning what rock is about – this is Slash forgetting.

Another thing that takes away from the record is the vocals, as I’ve made quite clear. When Velvet Revolver was looking for a singer, everybody thought they would go with Sebastian Bach formerly of Skid Row. Here is a guy that understands what rock ‘n’ roll is about – high-energy, sometimes aggressive, balls to the wall rock vocals with incredible range. Not complaining while mumbling to mediocre guitar work.

If you are looking for a Slash record that sounds like GNR from his post GNR days, pick up the Slash’s Snakepit records. High-energy rock ‘n’ roll with no posers involved. If you are looking for an album with no songs worth talking about but I’m sure the media will say you should like, then this dust collecting jewel case is for you.