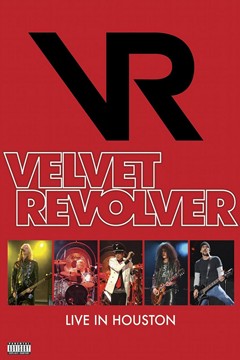 Review:
There’s a reason why Velvet Revolver‘s 2005 live performance in Houston, Texas hasn’t seen the light of day until now — 5 years after the fact. But it’s not because the band has since parted ways with their volatile and self-destructive lead singer Scott Weiland — that’s way too obvious.

After viewing this 78 minute Velvet Revolver performance in support of their debut album one can easily understand the cause for the delay. This performance isn’t the band’s best — the set is limited one so-so album’s worth of original material and some classics from Guns N’ Roses and Stone Temple Pilots that were forced in with mixed results. The most agonizing part of this DVD is that it looks like it was shot and edited by the crew who produced The Midnight Special television series back in the ’70s — complete with cheesy effects, predictable angles and cameramen caught in the panoramic shots.

Included in this DVD are originals such as “Sucker Train Blues”, “Set Me Free” and the band’s hits “Slither” and “Fall To Pieces”, but there are no extras to speak of. There are however some interview clips of the band professing their love for one another and some very unfunny clips of a chick dressed up in Nazi gear inserted haphazardly between songs.

Live In Houston could be used as the blue print for what not to do with your band’s live DVD — which leads me to believe that this was not sanctioned by the band themselves. This DVD is recommended for diehard fans only… if there were any in the first place.