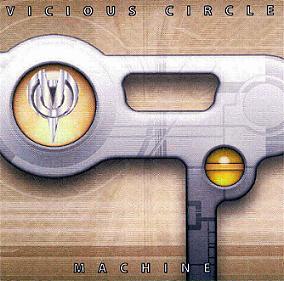 Review:
Canada’s Vicious Circle seems to be walking the fine line between 80s hard rock and 90s grunge, trying to blend both sounds without committing to any single scene. It isn’t easy to pull of such a stunt but Machine works because they offer enough surprises to keep fans of each genre happy. For every distorted vocal there will be a killer guitar solo to offset it, and while Vicious Circle seems unable to produce a sound to call their own, they are entertaining.

“Waiting” has a bluesy vocal sound over some early wah wah effects before morphing into an aggressive rocker. “Only Child” would have felt at home on the BulletBoys‘ Freakshow album. If someone would have been able to pull the 70s retro band Cry Of Love into the 21st century they likely would have ended up with a song like “Pulling Me”. “Maxim Madame” would have been a hit back in 1989, very catchy and up-tempo. “Stop, Drop & Roll” sounds like it was mixed in a box, yet has the relentless attack of Helix in their prime.

The more I listen to Machine the more I like it, but Vicious Circle might be better off if they picked a style and ran with it. With that being said, fans of 80s metal and 90s grunge (Soundgarden can be heard as an influence at times) should each be able to find enough memorable moments to make this album worth purchasing. The band can be found at www.viciouscircleonline.com.