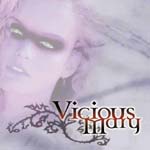 Review:
A melodic rock band, Vicious Mary is actually a side project of Eldritch members Terence Holler and Sean Henderson. With this debut album they employ a sound similar to that of Dokken and Seven Wishes.

Highlights include the rocking “Million Words”, “The Call” and “You Run Me Wild”. A nice ballad named “Crying For You” and the pretty instrumental “Keysage” round out the album nicely. The musicianship is very tight throughout the album, and the band shows a lot of potential here. Vicious Mary receives two thumbs up! You can find more info on the band at their website.