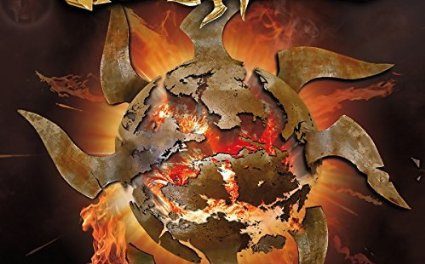 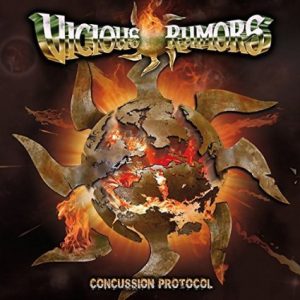 VICIOUS RUMORS
CONCUSSION PROTOCOL
To be released on August 26, 2016 (Steamhammer/SPV)

Review:
Vicious Rumors are a band that was started by Geoff Thorpe in 1979, and was formed in the San Francisco Bay Area. Since the start, they have been one of the wrecking forces in the power metal scene. With their debut release, Soldiers Of The Night in 1985, Vicious Rumors have released eleven studio albums and four live albums. Concussion Protocol will be their twelfth studio release on SPV/Steamhammer Records, and also features newcomers Nick Holleman on vocals and Tilen Hudrap on bass. Throughout their career, Vicious Rumors have had several line-up changes, but this current roster sounds like a well-oiled machine. The rest of the band consists of Geoff Thorpe and Thaen Rasmussen on guitars and Larry Howe on drums.

This is another instance where I am not familiar with the band, but once I heard this album, I felt compelled to write a review about it. I was blown away at the talents of this band, and if this album is any indication of Vicious Rumors‘ previous work, I know I will be in for a treat when I check out their earlier albums. Concussion Protocol is filled with fast blazing guitar solos, heavy riffs, double bass drum pounding, thick and heavy bass playing, and different vocal ranges from Holleman.

Things get started off with thundering beats from Howe and some fantastic guitar playing from Thorpe and Rasmussen. Soon after, “Concussion Protocol” is a full on double bass kick with a fast riff that will kick you in the head and could possibly leave you in a haze on how hard it hits you. When the song ends, the next track “Chemical Slaves” starts off with another drum assault from Howe and then a thick and heavy riff that will have you banging your head. Holleman shows his vocal range on this track as he can have a deep raspy metal growl and then hit the high notes like Rob Halford. Each song on this album is filled with amazing guitar solos, so I won’t keep on repeating myself with each song about how great the solos are from Thorpe and Rasmussen.

Lately, I have been reading about how bands are getting fed up with all the cell phones in the air at concerts and how the fans are not even watching the show; or how people are so connected to technology and care more about their Facebook posts, then what is actually going on in this world today. Not only are bands talking about it in interviews, they are writing songs about it. Vicious Rumors are part of those bands and they felt compelled to write “Victims Of A Digital World” which is about how people’s lives are controlled by technology. This track is a slow thick heavy riff with some blazing guitars, hard hitting drums, and thumping bass lines that will have your fists pounding in the air.

“Chasing The Priest” is a fast paced power metal track that shows how high Holleman’s voice can go. His voice is a perfect fit for this type of metal, and I am sure that lifelong fans will appreciate his voice as well. The rest of the album is chocked full of speed and power metal, with the exception of “Circle Of Secrets,” which is a slower doomy laden track that gives the listener a break from all the madness they have just heard. “1,000 Years” is another quick kick in the head. “Bastards” is a hard hitting rhythm heavy track. Finally, “Life For A Life” has a chugging riff with deep vocals and loud guitars between the chorus, and is the perfect track to end this album.

Vicious Rumors have started trends and never followed them. They are one of the pioneers of power metal and Concussion Protocol shows why they are still one of the leaders in this genre.

Vicious Rumors‘ “Take It Or Leave It” video:

Vicious Rumors – “Take It Or Leave It” (Official Video)