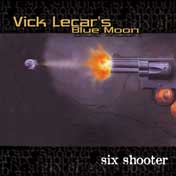 Review:
First of all let me say that Vick Lecar just rips on the guitar, and Six Shooter (originally recorded in 1993) kicks ass! “Rough Rider”, “Betrayed” and “King Of Thunder” really rock, and there is also a very good instrumental called “Condor Pass”.

The musicianship is excellent on this melodic album, it reminds one of Dokken and Racer X. Six Shooter receives two thumbs up!