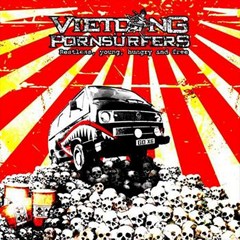 Review:
The award for band name of the year goes to Sweden’s Vietcong Pornsurfers, who not only peaked my interest by their strange moniker but by also sending a cassette copy of their new album Restless, Young, Hungry And Free. Do people still play cassette tapes, and do many of the teenage readers even know what they are? It was the first one I had seen since the mid ’90s, so I had to dust off the old tape-player and give this thing a listen.

Albums by bands with oddball names rarely live up to their billing, so I was crossing my fingers that the long forgotten tape-player wouldn’t eat the cassette before I had a chance to judge for myself. I pressed play and waited… and waited… until I finally heard music — and what I was hearing wasn’t half bad. A mixture of punk and sleaze with gruff and hoarse vocals, not unlike that of The Dogs D’amour‘s Tyla on occasion, seemed to be the formula right from the thundering beginning of “The Flag Is On Fire”. But just as I was starting to get into things with the slightly slower “Come Back” I had to get up and flip the tape over!

Side two kicked off with the furious “Getaway Boy” which almost ventured too far into punk territory for my tastes, but I was enjoying the attitude, vocals and guitar solo. In fact the entire second half is played at top-speed, not unlike the intensity of a ‘pornsurfer’ using his hands! The last two songs, “A Song For Jonas” and “Let Me In”, are probably the best as the band slam and scream their way through these tracks.

By no means is Restless, Young, Hungry And Free the best album I’ve heard this year, I found it rather repetitive as a whole, but the whole affair has ample amounts of energy and a DIY punk attitude, from the rapid-fire drumming right down to the gang-style vocals — with a bunch of guitar solos thrown in for good measure. If the punk garage-rock inspired sounds of The Hellacopters and Gluecifer is you’re thing then this one could be for you.