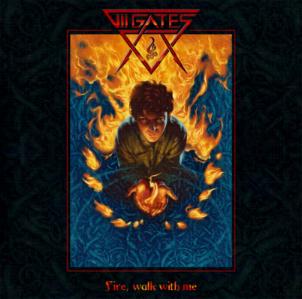 Review:
VII Gates are another new band from Sweden, but one that focuses more on traditional heavy metal than sleaze. Powerful vocals, incredible guitar leads and well-written songs all make VII Gates a band to keep an eye on.

The album starts off with “Bounded By Hate”, which is the group’s finest moment. The song is driven by a familiar riff, slows things down occasionally and then vocalist Criss Blackburn unleashes a picture perfect Rob Halford delivery on the chorus. The twin guitar attack really shines on “Seconds Left To Live”, a technically sound melodic rock song. “Under The Crossed Bones” is a galloping number with an Iron Maiden feel and straightforward chorus. “Love Bullet” is saved by it’s highly addictive chorus while “A Dark Room Of My Mind” is a seven plus minute epic that is straight out of Judas Priest‘s playbook with some keyboard leads added.

I don’t listen to much traditional heavy metal anymore, but I really did enjoy Fire, Walk With Me. There is no denying that the band is very proficient and Blackburn has vocals that could shatter glass, but thankfully he doesn’t feel the need to flash his high range at every opportunity like so many others do. Some of the guitar riffs I could have swore I’ve heard before, but I’ve always preferred solid material over originality. If you feel like getting a heavy metal fix, one that sometimes treads into melodic rock territory, go to www.sevengates.se and check out VII Gates.