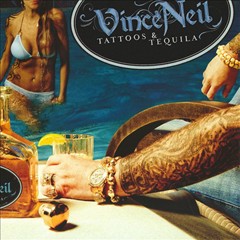 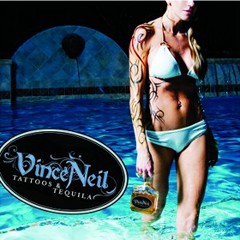 Review by Ruben Mosqueda:
If you’ve followed Motley Crue‘s career you know that Vince Neil isn’t the brains of the operation. Vince is a great showman and frontman, but as a singer he’s average at best. With that said, you’d think with his third solo studio album he’d do better than issue a CD that consists of eleven cuts, mostly covers, with only two originals… neither of which he had a hand in writing.

Tattoos & Tequila sounds like Motley Crue throwaways from the Red, White & Crue writing sessions that produced “If I Die Tomorrow” and “Sick Love Song.” The track “Another Bad Day”, originally written by Nikki Sixx for the New Tattoo album, doesn’t fair much better, but it’s tolerable. It’s all downhill from there though as Vince Neil and his very capable band which consists of Slaughter‘s Jeff Blando and Dana Strum with drummer Zoltan Chaney obliterate classics by Sweet, Aerosmith, Scorpions, Cheap Trick and Creedance Clearwater Revival.

There are a couple of good covers versions on the record though — Vince‘s version of The Hollies “Long Cool Woman” turned out well, as did his version of Elton John‘s “Bitch Is Back”, and his take on The Sex Pistols‘ “No Feelings” is decent. The track to avoid on this album, or just in general for future reference, is “Viva Las Vegas” — it wasn’t cool when Elvis Presley recorded it and it isn’t cool when anyone else does. It’s a dreadful song plain and simple. There’s a bonus track of Vince butchering ZZ Top‘s “Beer Drinkers & Hell Raisers” from these sessions, but I have no desire to buy it or even attempt to download it for that matter.

Tattoos & Tequila is the soundtrack for Vince Neil‘s soon to be released memoirs. Sound familiar? Well, unlike Nikki Sixx‘s Sixx AM album, rest assured that this album will not create a buzz and will fall into obscurity quicker than Nikki says, “did I mention I died twice?”

Motley Crue fan or not, Tattoos & Tequila is a hard sell and it falls short. This album is nothing more than a ploy to push Vince‘s line of tequila, his club ‘Feelgoods’ and his book — which is fine, but at least put in an effort while making a quick cash grab.

Review by Chifo:
Here we go again, a new Vince Neil album entitled Tattoos & Tequila. The CD has nothing to do with Motley Crue, allegedly…

First off, the production on Tattoos & Tequila is sweet… really good. Vince‘s voice comes through loud and clear and everything seems to be in good balance. The song list of mostly covers is not bad at all and should present Vince with a number of diverse tracks to get his voice around.

And that’s where it goes wrong. When you cover someone else’s work you want to do it in your own style. And Vince does, but his style isn’t what it was on his first solo albums. Those albums incorporated different styles and sounds, but this is straight-forward rock ‘n’ roll that sounds like… well, Motley Crue. That’s it in a nutshell, when I wanted Motley Crue on Vince Neil‘s solo albums it wasn’t there, and when I wanted the other sounds on this CD I got Motley Crue. Vince and the Motley Crue sound go hand and hand, so it’s hard to hear anything else with that association.

The title track is excellent, I like it a lot — it’s energetic and fast, and to be fair, is probably what Vince Neil is all about. Then the Motley Crue effect kicks in. “He’s A Whore” is just “Public Enemy #1”, “AC/DC” is just “Girls, Girls, Girls” and so forth. And don’t get me started on “Viva Las Vegas” because it puts me into a rage, my poor speakers nearly good a foot through them.

Do yourself a favor… to amuse yourself while torturing yourself with this CD, play guess what Motley Crue song this sounds like. You’ll enjoy Tattoos & Tequila more as you swap between it and your chosen Crue song. Avoid this CD and spend your pennies on something more worthwhile.