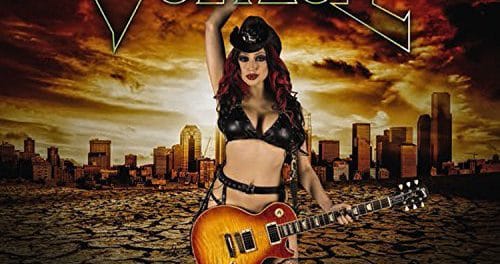 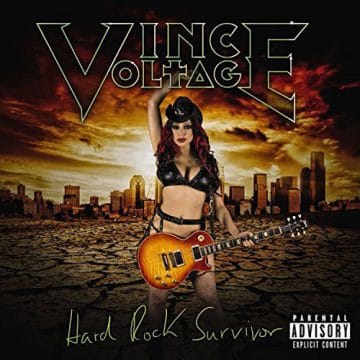 Review:
Well as per usual, I offer another should be known and must be owned slab of pure ’80s hard rock splendor in the debut offering from guitarist Vince Voltage. Vince for those unfamiliar, is quite the player, writer, producer and photographer. He has played in or about Germany for years and aside from this solo outing, he plays in the melodic hard rock band Pussy Sisster among others. Obviously, we live in a fickle time and long gone are the days of the rock star. Even though, just one look at Vince and you won’t believe him to be anything but. However, if you yearn for those halcyon days look no further than this long play aptly titled Hard Rock Survivor.

From the scorching opening notes of “Hard Rock Survivor” that is a note for note rip of Mötley Crüe‘s “Live Wire” on steroids morphed into a new world anthem for those under payed and underappreciated toiling in the rock n’ roll trenches. For no more glory than to play a Tuesday night for a couple dozen patrons at the local watering hole and hope for a payed bar tab and first pick of the closing time litter. Doesn’t sound to glamorous but as Mick Jagger once said “I know it’s only rock n roll, but I like it” and Vince is living the life and sharing it with us on this long play.

Vince has surrounded himself with a gaggle of proficient players and a handful of vocalists that compliment the music and each other as to mostly fool the listener into thinking one voice could have sung the entire record. I’m not going to do a play by play but there is an equal smattering herein of hard rockers, arena rockers, sleazy rockers and cigarette lighter ballads to reel in the ficklest of listeners and to hook their sister as well. However, the handful of power ballads are especially noteworthy, especially “Killing Times” which is just simply brilliant. So haunting and Denis Hubner‘s voice is nothing less than beautiful. Yep, I said beautiful. No knock on the rockers which are aplenty in the likes of the keyboard driven “Broken”, the supremely sleazy and catchy as hell ‘Some Like It Ugly”  and a few lusty numbers in “Busty Sandy” and “Lick It If You Like It” but the guys over at Frontiers would be frothing at the mouth over a melodic AOR album of songs like “Killing Times,” “Something To Believe In” (not a cover by the way) and “The Ballad Of Ricky Razor” — the latter which could easily be a “part 2” to the Skidsters‘ “18 And Life” and has a frickin’ cello solo — hell yeah!

On the whole, Vince is on a solid path with his freshman outing Hard Rock Survivor. You can’t dismiss the quality of the writing, the musicianship and if you’re going for the rock n’ roll trifecta, Hard Rock Survivor has the quintessential hard rock album cover as well featuring, well I will leave that for you to Google, but her presence certainly ticks the third rock n’ roll box literally…

Here’s looking forward to what Vince creates next. I know I will be watching, listening and waiting and you should to.

Vince Voltage :: Some Like It Ugly :: Hard Rock Survivor

Vince Voltage‘s “Something To Believe In” video:

Vince Voltage & Denis Hübner :: Something To Believe In (Remastered)

Vince Voltage & Denis Hübner :: Something To Believe In (Official Video) from the album “Hard Rock Survivor” :: Back to the 80shttp://www.vincevoltage.comhtt…