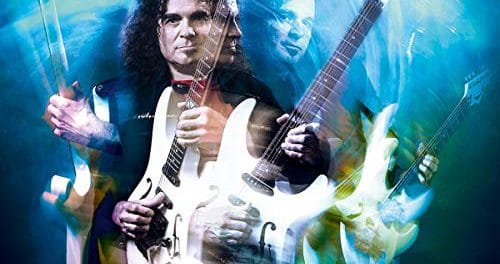 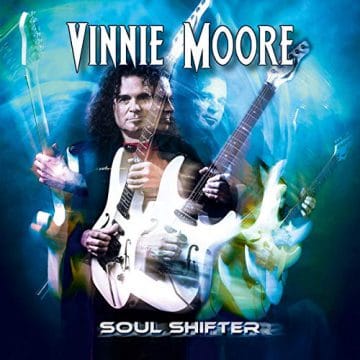 Review:
A young Vinnie Moore, age 12, saw a guitar in a JCPenney catalog that he wanted for Christmas. Within a year, Moore decided that playing a guitar was going to be his chosen life-long profession. After taking lessons from (Delaware instructors) Mary Biddle and Nick Bucci, a student of legendary jazz guitarist Pat Martino, Moore has consistently risen above his contemporaries with both his guitar virtuosity, as well as his commercial musical output. Moore‘s latest album, Soul Shifter, which gets released publicly on October 9, 2019, is yet another example of those aforementioned claims. Soul Shifter is Moore‘s ninth full length solo studio album. Moore‘s first album, 1986’s awe-inspring Shrapnel Records classic, Mind’s Eye, continues to be revered as one of the greatest rock guitar albums of its generation.

Soul Shifter is Moore‘s first solo album since 2015’s Aerial Visions. Since recording The Salentino Cuts with UFO in 2017, (Moore‘s sixth studio album with the band), Vinnie Moore has toured and recorded at a breakneck pace by performing upwards of 175 concerts around the world as a solo artist and with UFO. Additionally, Moore has recorded guitar solos that are featured on former Ozzy Osbourne and current Firewind guitarist Gus G.‘s 2018 single “Force Majeure,” and on the 2019 album Wired For Madness by Dream Theater keyboardist Jordan Rudess who appeared on Moore‘s 1988 Billboard 200 charting album Time Odyssey. Soul Shifter makes its debut in the midst of concert dates with UFO on their Last Orders 50th Anniversary Tour.  Moore has been a member of UFO since 2003. Moore‘s tenure as UFO‘s lead guitarist is longer than any of his predecessors. Fans of rock, metal, blues, jazz, and contemporary guitar will be ecstatic upon hearing all of Soul Shifter‘s ten tracks.

Soul Shifter begins with “Funk Bone Jam.” As the title alludes, this is a funk oriented track that features bassist Rudy Sarzo (known for his work with Quiet Riot, Ozzy Osbourne, and Whitesnake), and is reminiscent of Billy Cobham‘s 1973 groundbreaking jazz-rock fusion album Spectrum (which featured Tommy Bolin of Deep Purple and James Gang fame on guitar). The next track “Same Sun Shines” is a stylistic change of pace from its predecessor. “Same Sun Shines” showcases hypnotically soothing guitar sounds and a rhythm section consisting of John Pessoni (from The Urge) on drums and bassist Randy McStine (who has toured with and played live for both Vinnie Moore and Gus G.). The third track “Kung Fu Grip” shows Vinnie Moore‘s mastery of funk rock and jazz rock fusion. Also, the song shows that Moore hasn’t lost one iota of his technical shredding ability. Suffice it to say, Vinnie‘s Dean Guitar speaks for itself on “Kung Fu Grip.”

“Soul Rider” is a song inspired by Moore‘s admiration for the music of the Allman Brothers. Gregg Allman unfortunately passed away in 2017 while Moore was working on the track. Track eight, “Mirage,” is an upbeat instrumental with Moore playing guitar, bass, and synthesizers and Richie Monica on drums. Monica, who played all drums on Aerial Visions, plays on all but two of Soul Shifter‘s tracks. “Heard You Were Gone” is a very touching and heartfelt track that evokes many memories and emotions. Moore reportedly wrote this song about (Dean Guitars CEO) Elliott Rubinson, who passed away in 2017. “Heard You Were Gone” has tempo changes that range from a country music guitar sound to a spiritually uplifting contemporary gospel music sound. Moore, Monica, Michael Bean (who was Moore‘s bassist on Time Odyssey), and pianist John Cassidy (who plays on seven of Soul Shifter‘s ten tracks) have composed a fitting tribute to Rubinson with “Heard You Were Gone.”

Soul Shifter ends with “Across the Ages.” The final song is a straight-forward, hard-rock, melodic, guitar oriented track. John Pessoni and Randy McStine both garner their second album credit with “Across the Ages.”  Soul Shifter clocks in at more than 45 minutes, which showcases Vinnie Moore‘s mastery of various styles, genres, and sounds of acoustic and electric guitars. Vinnie Moore is the guitarist, songwriter and producer of Soul Shifter, which is, quite possibly, the best instrumental album of 2019.

Reviewed by Ryan Witting of Rockin’ You All Night (Soundcloud, YouTube) for Sleaze Roxx, October 2019