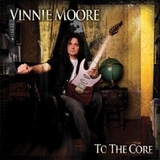 Review:
Vinnie Moore has come a long way since his debut record that was released by the Shrapnel Records family. Over the years, musicians on that roster were considered shredders and nothing more. The truth though is that Vinnie Moore has proven to be quite an eclectic guitarist over his twenty plus year career. He can play metal, hard rock and this kind of jazzy, progressive, lite rock music that is found on To The Core.

It’s not what I expected from Vinnie, but if you’re a fan I’m sure you’ll snatch To The Core right up. The rest of you however might want to wait and pick up the new UFO album The Visitor.

Reviewed by Ruben Mosqueda for Sleaze Roxx, May 2009.