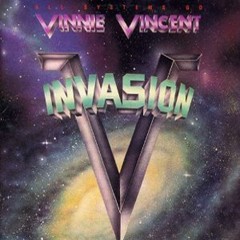 Review:
In 1985 Vinnie Vincent, recently fired from KISS, decided to start up his own up his own band. He called it the Vinnie Vincent Invasion, and as the name suggests, the idea was for him to be the star of the show. He recruited Robert Fleischman (Of Journey fame) to sing lead vocals, Dana Strum to play bass and Bobby Rock to handle the drums.

Vinnie Vincent Invasion released their self-titled debut album on August 2, 1986 and filmed a video for “Boyz Are Gonna Rock”, with their new singer Mark Slaughter lip-synching to Fleischman‘s vocals! The album was a commercial success, so in 1988 the Invasion entered Cherokee studios to record their follow up album All Systems Go. Once the album was completed Vinnie Vincent Invasion headed out on tour, supporting Iron Maiden, to promote the CD.

The opening track “Ashes To Ashes” begins with some sort of opera song being played backwards and then launches into a massive riff accompanied by Mark Slaughter doing his best “Immigrant Song” impression. The song slows down for a while, but not long, because Vinnie Vincent is on hand — and he plays one of his most ‘exotic’ solos to date; this is definitely an interesting listen for guitar players. “Dirty Rhythm” is one of many sexually driven Vinnie Vincent Invasion songs, incorporating very ‘dirty’ rhythms indeed, not just guitar wise, but within the lyrics as well; “Come together in serenade, Pull the pin on my love grenade!”

“Love Kills”, the second single from All Systems Go, is a typical hair metal ballad which found its way onto the Nightmare On Elm Street 4: The Dream Master soundtrack. “Naughty Naughty” and “Burn” are both sleazy, balls out axe bashers, while “Let Freedom Rock” is basically the same but with a more patriotic approach and “That Time Of Year” is more or less “Love Kills” part two. “Heavy Pettin'” is a good time rocker with an intro that sounds a lot like Led Zeppelin‘s “Misty Mountain Hop”. “Ecstasy” is just another song meant to get you holding a lighter in the air while the remaining tracks, however experimental, all sound the same.

Actually, the majority of this album all sounds the same. Regardless, All Systems Go is a good buy, but falls short (by a hair — and the band members had LOTS of hair to give) when compared to the debut album due to, quite simply, repetitive music.