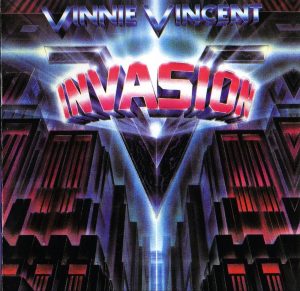 Review by Olivier:
Today is the 30th year anniversary of the release of Vinnie Vincent Invasion‘s self-titled debut album so what better time to revisit the album. It must be a good 25 years since I heard this album so it was a lot of fun revisiting it. My initial thoughts when I first heard the album still stand today.

The enigmatic Vinnie Vincent likely felt held back in terms of the guitar playing when he was in KISS and while contributing to two of their best albums ever — Creatures Of The Night (1982) and Lick It Up (1983). Without any big brothers (i.e. Gene Simmons and Paul Stanley) looking over his shoulders, Vincent not surprisingly was free to do as he pleased and he came up with an over the top glam metal debut “solo” album filled with way too much guitar soloing and shredding.

The funny thing about Vinnie Vincent Invasion‘s self-titled debut album is that most of the songs are actually quite good but the crazy amount of guitar shredding at certain times kills the accessibility of the album to the average glam metal listener, let alone the mainstream hard rock listener. That is unfortunately the downfall of the Vinnie Vincent Invasion album. Songs like “Do You Wanna Make Love” and “Back On The Streets” are quite catchy but each song is filled with an intense “cram as many notes as I can” guitar solo and some needless guitar shredding towards the end. Actually, that’s the case for almost each song on Vinnie Vincent Invasion! Another “love it or leave it” factor when listening to Vinnie Vincent Invasion‘s debut album is the very high pitched vocals of Robert Fleischman. Personally, his singing has never bothered me and I, in fact, enjoy his high pitch delivery but I acknowledge that it might grate on someone’s nerves after awhile, especially when you combine the singing with the over the top guitar shredding.

The best tracks on Vinnie Vincent Invasion are the first single “Boyz Are Gonna Rock,” “Shoot U Full Of Love” (which could have been on a KISS album), “Animal” and “Do You Wanna Make Love.” The forgettable tracks definitely start with the rather long and almost eight minute in length album closer “Invasion” which really is not a bad track until the last three minutes or so when Vincent goes crazy with his guitar whammy bar and proceeds to deliver an unlistenable very long ending (topping almost three minutes) to what should otherwise be considered a good albeit over the top album. This is where Gene Simmons or Paul Stanley would have come in handy as there is absolutely no way that either would have tolerated such a terrible ending on a KISS album. Other forgettable tracks include the rather speedy ballad “No Substitute” and the mediocre “Baby O.”

At the end of the day, Vinnie Vincent Invasion‘s self-titled debut album is like the story of a young boy growing up to be a teenager and being able to move out of the family home while saying a big “fuck you” to his parents after feeling held back for so many years. Unfortunately, the teenager does not realize that his parents were actually getting the best of him. Left to his own devices in the real world, the teenager goes on to self-destruct. His parents eventually take him back in (i.e. KISS‘ Unholy album) but by then, the teenager is a full blown adult that is just too difficult to reign in.

Review by Pam:
This is the debut disc from Vinnie Vincent Invasion (pre-Mark Slaughter) featuring the ex-Kiss guitarist. It also features future Slaughter bassist Dana Strum and Nelson drummer Bobby Rock. The album is full of all out rockers such as “Boys Are Gonna Rock”, “Shoot U Full Of Love”, “Animal” and “I Wanna Be Your Victim”! There is also a nice slower paced number called “No Substitute” and a nearly eight minute epic called “Invasion” that ends with Vinnie wailing away on his guitar.

The album is chock full of sex/sleaze and the liner notes say, “made 2 B played at maximum volume”, which almost made it too inaccessible to the average hair rock fan, leading to mediocre sales. Invasion should have had more recognition, but still deserves two thumbs up!