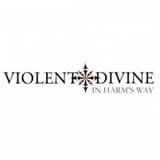 Review:
As the Swedish assembly line of rock continues to roll, it now offers us a band of a different style. Unlike everything else I have heard from this country, Violent Divine doesn’t have the Jack Daniels-influenced Hollywood swagger of its counterparts.

In Harm’s Way is a 12-track offering of harder-edged music than the pop-glam sound I prefer. I gave it several listens, hoping it would grow on me, but it never really knocked me on my ass. It isn’t bad by any stretch of the imagination, just simply nothing impressive. At best the tracks seem to work better on their own, rather then as a whole. Overall the CD became a bit redundant to me.

Vocalist Mike has an interesting and unique style, but it soon grated on my nerves. Klaus, on bass, merely holds the rhythm section together, while drummer Gus is a lot more impressive. Guitarist Q is proficient, but doesn’t offer up any variances on his style… it is simply there.

I can accept the fact that Violent Divine has a different sound than what Sweden has been offering us of late, and I definitely have an open ear to music. It sounds as if the band wants to get more metal, but doesn’t really make much of an effort to push itself into that direction which results in them coming off as hesitant. “I Am” for example definitely has a magnificent guitar riff to it, but the rest of the song isn’t on par, so it becomes a major letdown. Though decent enough, and not by any means bad, I don’t think this is something that will stand out, regardless of your musical preferences. In Harm’s Way won’t get repeated listens, and will probably be tossed in a pile of oblivion by most.