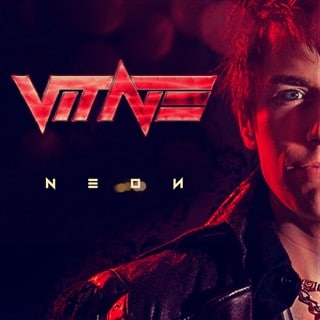 Review:
Once upon a time, or it could of been two, there was a young man not only driven by, but fueling his inner rock star flame with an array of hard rock/hair metal anthems of the ’80s ilk that would please, influence and ruin many a man prior to and long after him. Vitne was honing his craft, preparing for the leap — the one we all want to take, but not many of us have the stones to take it. The one where you lay it all on the line for that one taste of recognition — that one bit of fame.

Fast forward, and Vitne leaves the good ole USA for the greener and glammier pastures of Norway, where as the lead singer, chief songwriter and player of multiple instruments, released an album of hard rock/hair metal anthems that have stuck in many minds like peanut butter to the roof of your mouth — playing his creative brand of sweet covered hair metal anthems with the moderately successful band SEKS.

Vitne has continued to progress. Always forward, never back. Fast forward once again, to December 2013, and Vitne, with a little help from his friends, self releases his latest solo album Neon. Thankfully Vitne crafted and kept a magical musical bond with fellow singer/songwriter and guitarist of the most epic proportions, Julian Angel (from Beautiful Beast fame). Think of Vitne and Angel‘s relationship as a modern day incarnation of Billy Idol and Steve Stevens. Yes, I know — killer, to say the least. Now to say that Neon is akin to a winning lottery ticket may be considered by a few naysayers as an exaggeration, but not much of one. Neon is a winner. A winner for the masses that live, breath and die for the music — for the music that shapes them and moves them. For the hard rock and glam metal community at large, this ‘oh so tasty’ collection of aural stimuli is as relentless as it is amazing. As toe-tapping as it is headbanging and air guitar invoking as it is stirring.

Once you drop the needle in the groove prepare for a ride like no other, with songs varying from the killer heavy metal opener of “Destroyer”, to the moving heartfelt ballads of “Silhouette” and “Rest In Peace”, to the catchy as hell glam rockers “Nasty Habit” (one of my fave’s), “Royal Nights”, “Cruisin'” and the USB only outtake “Fire” (another favorite). There isn’t one minute of this release that should be left unheard, overlooked or ignored.

My diatribe is nearing its end. I certainly hope I did Vitne‘s Neon release a bit of justice. I, like many of you reading this, am a carrier of the metal flag. A card carrying lifelong member of the hard rock nation, a glam rock fan boy for life and a supporter of the genres that we can simply dub rock ‘n’ roll. To not shout to the masses the amazing talent that is Vitne and his band of merry metalers would be a discredit to him, me and the rest of you. Take my handful of words to heart, seek out and grab hold of your rock ‘n’ roll destiny by owning, listening to and loving Neon.