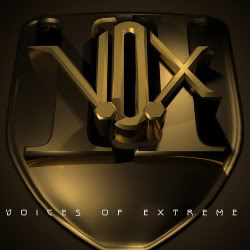 Review:
Voices Of Extreme, or V.O.X. for short, are a New York based contemporary hard rock act with strong AOR influences. Formed in 2006, their debut album Hypocrite gained some favorable underground press both Stateside and abroad. Hypocrite is considered somewhat of an undiscovered gem and was produced by former Anthrax guitarist Dan Spitz. Today V.O.X. is co-managed by Iron Maiden‘s Nicko McBrain, which should help them get some additional exposure.

Voices Of Extreme‘s sophomore CD, Break The Silence, is an incredibly melodic — and at times unremarkable — album with potent vocals courtesy of singer Don Chaffin. There are catchy choruses, the musicianship is solid throughout, but the lyrics are only so-so. The result is that Break The Silence is an acceptable rock record with the standout tracks being the rocker “Apocalypse”, which sounds like a cross between latter day Scorpions meets ’80s Bon Jovi, and the ballad “Tell Me What It Takes” which has a little bit of a Three Doors Down vibe going on. However there are also tracks that just seem forced and contrived. Case in point; “Blown Away” — it is a heavier, edgier song that nears nu-metal territory that I don’t think works very well with the rest of the material on the album, it’s extremely redundant, inferior, and ends up being a filler song.

Voices Of Extreme is worthy of a listen for the rock geeks who like their AOR infused with a modern spin.