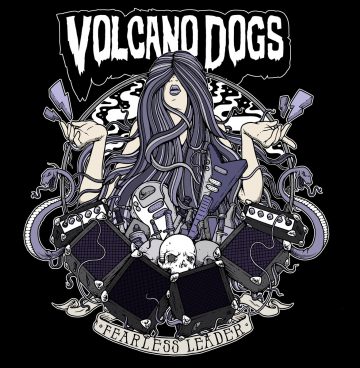 Review:
The Volcano Dogs are a quartet from Pittsburgh, Pennsylvania, USA.  Fearless Leader is their second album following their self-titled debut in 2016 via Rat Records.

This bar band really isn’t bad, but frankly this production is lousy. There is no high end, and every instrument is mixed into a mid-range blur. That’s too bad, because the old school punk of “Mean Street Kids” could really be something if the sound was better. “Fake Riot” is no better. Again, it could be a decent song if it were captured in the right way.

I actually went back to listen to the Sex Pistols‘ Never Mind The Bullocks, and sure enough, that had a pretty good production value for the time, and for the day’s audience expectations. Where I knew every note of “Holiday In The Sun” or “Pretty Vacant”, I had a hard time discerning the details of Fearless Leader.

That’s essentially my theme on this album. The production sound stinks. I enjoy some of the guitar work, like on “Apocalypse Witch”…. Very much like an early Metallica with a Sex Pistols chorus. I’m hearing a bit of Headstones in “Rocket Ride Superfink” but on a very limited level. Opening track “Blow It All Away” tries to be punk, but for some reason I just don’t buy it.  It’s not a bad tune, but seems to be a wink between the best of 70s British punk and Green Day.

At the end of multiple listens, I would say that the Volcano Dogs must be a blast to see live in your local watering hole. But Fearless Leader as a record is not particularly interesting. The production is generic and consistently poor throughout. Even though the songs themselves have an adversarial and aggressive quality, there is little diversity to their delivery. Fearless Leader is not something I will hang onto in the future.