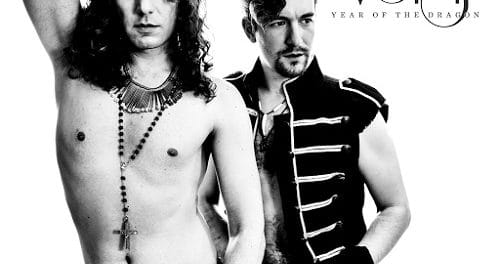 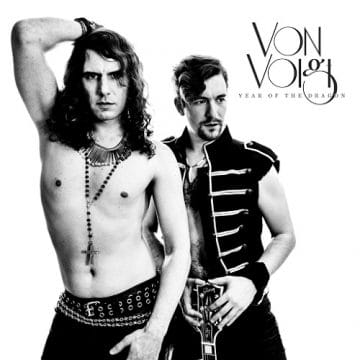 VON VOIGT
YEAR OF THE DRAGON
Released on June 21, 2016 (Sanctified)

Review:
Von Voigt‘s Year Of The Dragon album was a surprising release for me because at first glance it was not what I was expecting. In addition, when I was listening to this, I was thinking this is what Paul Stanley‘s last solo album should have sounded like, because for this listener/writer, that album was severely disappointing compared to his first KISS era solo album. I mention this because when you hear Tommy Von Voigt’s voice, it bears a remarkable resemblance to the Starchild himself, plus Steevi Jaimz (ex-Tigertailz) with his later day solo output. Just listen to opener “Gimme That Shock” and tell me it’s so. Musically also, there is a slight later day KISS circa Hot In The Shade / Crazy Nights feel to the music. Plus there are touches of Swedish stuff Chris Laney associated sounds like Zan Clan, Dynazty, etc, so it does have a touch of a modern day rock feel and also has a bit of quirky humour too maybe.

There are plenty of cool rock moments that are catchy and get you moving with some of the riffing. Songs like “(You’re An) Animal” and “Year Of The Dragon” are good rock anthems, that fit the mold. “Star Shaker” with its shouted background vocals is perfect for the live setting, “Bad Little Boy” seems to be an homage to Queen. The song “Get It While It’s Hot” — if you close your eyes — you would swear it comes off Jaimz’s latest solo album. As par the course from the “hair metal” heyday, there is a ballad, “Dear Jupiter” that is channeling Queen — not the overtly sappy style but along those lines. The album closer “Shame On The Radio” is a fast paced, catchy number with its heavy riffing and the thumping double bass — such a cool closer.

I don’t want to say this is amazing but it’s not boring in any way. Like I mentioned, I was definitely surprised and the production is up to par and sounds great. Also, some may perhaps say I’m vain/superficial, for longing for the looks and imagery of the good old days with the hair and make-up, hence those avid readers of my reviews know I look for and report on the image or lack thereof of some of the bands I review. The music itself puts a smile on your face with some of the song styles and with the voice of Tommy Von Voigt, who sounds like Paul Stanley at times, so that may be a plus for some. So take a chance, it is an interesting listen.

Reviewed by Will “Lee” Bones for Sleaze Roxx, January 2017