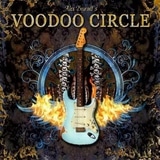 Review:
Hey, has Yngwie Malmsteen finally managed to come up with an exciting album after all these years? That was the first question I asked myself after hearing the intro to “Spewing Lies”, which kicks off Voodoo Circle‘s debut album in great style.

Silent Force guitarist Alex Beyrodt, who seems to be the mastermind behind this band, sure knows how to deliver the goods in the same tradition as Ritchie Blackmore, Yngwie Malmsteen and Timo Tolkki. But with respect to all those great player’s past work, Beyrodt also hasn’t forgotten how to write catchy hooks and he always leaves enough space to let David Readman‘s (formerly of Pink Cream 69) strong pipes turn nine of the ten (there is one instrumental) songs on Voodoo Circle into little gems, which should cause every fan of classic Rainbow or early Malmsteen to wet their pants.

Seriously, this is one of the best albums in this style I’ve heard in the last decade! Just listen to the fantastic “Kingdom Of The Blind” or the perfectly crafted out “We’ll Never Learn” and you’ll look past the only average track “Enter My World Of Darkness”.

Produced by Dennis Ward, and with Beyrodt‘s former Sinner co-hort Mat Sinner on bass, you can’t go wrong with Voodoo Circle if you like any of the aforementioned bands – this is much superior to Yngwie Malmsteen‘s latest effort Perpetual Flame!