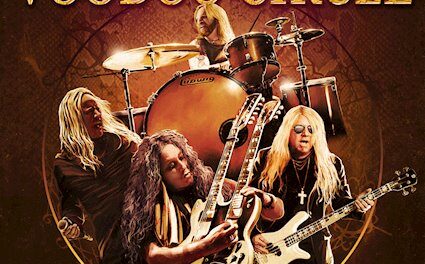 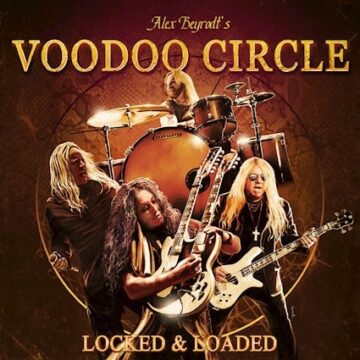 When re-reading the Sleaze Roxx album reviews of Voodoo Circle, and listening to Locked & Loaded, one thing becomes clear immediately. All the haters who dismiss Greta Van Fleet as a Led Zeppelin ripoff, or the Sheepdogs as a Guess Who cover band, or even Airbourne as AC/DC wannabes, should pass on this band here and now. Voodoo Circle owe much to Whitesnake, including the vocals, guitar and drum sounds, and even some of the riffs. I could point to Whitesnake, Rainbow, and Deep Purple comparisons throughout, but I will move beyond it all to only talk about what can be found on this particular album.

“Flesh And Bone” is a perfect kickoff to Locked & Loaded. Fantastic musicianship and well integrated merging of guitar, organ, and rhythm sections. This is some great European power rock so far. The intro to “Wasting Time” flashes me back old school to Bonham’s “Wait for You”. The big difference is that Beyrodt’s heavy guitar sound rescues the verse. I’m not sold on the chorus, but it does work for the most part. The drifting intro to “Magic Woman Chile” betrays a solid guitar driven track with excellent vocals.

Title track “Locked & Loaded” is another banger, at least in the beginning. The keyboards betray the entire song. It’s hard to explain, but imagine ’80s synths with the squealing notes and pitch control. I would be all in IF ONLY the keys didn’t exist here. As is, I find it borderline unlistenable. The blues stomp “Devil With An Angel’s Smile” is much better. Alex Beyrodt clearly put some time into developing his guitar sound, which dominates “Straight For The Heart.” I promised I wouldn’t say this again, but the song is full on Whitesnake.

“Eyes Full of Tears” is just another power ballad. But now I’m thinking what the fuck? “Devil’s Cross” starts with some kind of really cheesy ’80s synth intro that reminds me vaguely of the song the nerds played to win homecoming in the 1984 movie Revenge of The Nerds. I just can’t. Yet that’s the puzzling thing about Locked & Loaded. For every miscast keyboard entry, there’s a killer track like “Trouble In The Moonlight” and “Children of The Revolution”.

In its review of Raised On Rock in 2018, Sleaze Roxx stated, “Overall, Voodoo Circle have given the world two sets of songs — one of gritty, bluesy rock and a second half of melodic rock. Both are solid, and worthy of investigation.” Of 2021’s Locked & Loaded, I would say, half the album is a keeper. Lose the awful synthesizers on other tracks and we’ll talk.