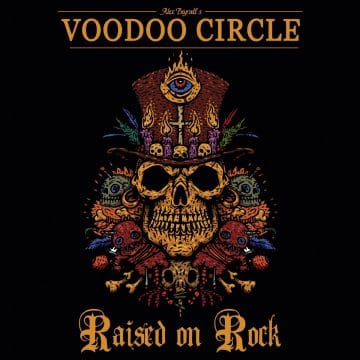 VOODOO CIRCLE
RAISED ON ROCK
To be released on February 9, 2018 (AFM Records)

The opening track “Running Away From Love” has a killer opening guitar line, and the chorus sorta reminds me of early Bon Jovi… sing along AOR.  Full stop with “Higher Love”, a more boogie/blues entry with both guitar and vocal effects. “Walk On The Line” is very much John Sykes era Whitesnake including the David Coverdale style vocals. Soaring guitars and heavy rhythms. Again, “You Promised Me Heaven” is different, with a wicked blusey intro and a Jimmy Page “Shake My Tree” style guitar work. Some gang vocals and great work from singer Herbie Langhans makes this tune really pop.

Voodoo Circle change it up a bit on track five with “Just Take My Heart.” It’s not bad, but different from the first four tracks, and is closer to mid-’80s melodic rock. “Where Is The World We Love” begins as a gentle ballad, and evolves into a mid-tempo rocker. Langhans‘ vocals are great, but I will pass on the overall song, as it is very similar to what Whitesnake have done before.

Now, wow! “Ultimate Sin” is full on. There is nothing wrong with this at all. Great instrumentation and vocals. The bridge is a bit suspect, but easily ignored on the strength of Beyrodt’s guitar line. I’ll give the same credit to “Unknown Stranger.” It’s like a strong Deep Purple upgrade for 2018. A great power rock tune to be sure. I’ll recognize the track “Love Is An Ocean” for starting with an interesting acoustic guitar/vocal line, and building into a decent anthem. The penultimate track “Dreamchaser” is Alexander Beyrodt’s ode to Ritchie Blackmore, stating in the PR release, “The arrangement of the number was changed and overhauled repeatedly over the years, now it’s matured to the point where it was ready for recording.” As a six and a half minute opus, it works as both an homage and a rock song with its own legs.

Overall, Voodoo Circle have given the world two sets of songs — one of gritty, bluesy rock and a second half of melodic rock.  Both are solid, and worthy of investigation.

Taken from the album „Raised on Rock”, to be released February 09th, 2018. Order: http://promo.afm-records.de/en/voodoo-circle Listen on Spotify: http://sptf…